View cart “The 7th Dawn” has been added to your cart.

The end of WW2 finds Major Ferris fighting alongside guerrilla groups in the jungles of Malaysia. Major Ferris is an American who was attached to the Australian 8th Army and stayed behind to co-ordinate native guerrilla groups. When the Japanese unconditionally surrender, everyone is rejoicing but a British officer pertinently comments that although the Malaysian people aided the British to defeat the Japanese their allegiance will shift and they might not be so friendly towards the British in the near future. Malaysia is a British colony and like many other colonies it struggles to gain its independence from the European powers. Major Ferris’ closest friend and comrade during the war, Malaysian colonel Ng, is asked by Ferris to join him into a business venture. Ferris has purchased a few acres of land rich in rubber trees and tin mines. He offers Ng an equal partnership in the venture but colonel Ng refuses. He explains that he has to go to Moscow to study at a school for political cadre. The two friends part ways. Eight years later, the British already have major problems in Malaysia. Many guerrilla groups openly attack the British army convoys, kill British officers, raid local plantations and businesses, rob the payroll of local companies, kidnap the European colonists and destroy British colonial property in the region. The British government is negotiating a peaceful withdrawal of British colonial forces from Malaysia promising total independence to the country. But the guerrilla leaders do not trust the word of the British. Therefore, they continue the guerrilla war against the colonial authorities. Many European colonists, plantation and business owners, sell their companies and assets and leave Malaysia. The only one not concerned by the violent events surrounding him is Major Ferris. His plantations and tin mines are not attacked by the rebels. When he drives in his convertible on local roads, the guerrilla groups laying in ambush do not harm him. One day, the English-language local newspapers, quoting a Soviet propaganda newspaper, indicate that former Malaysian guerrilla leader, colonel Ng, has returned from Moscow to co-ordinate all guerrilla groups in Malaysia. The chief of police and the British Army commander in the region arrive at Major Ferris’ house to confirm the fact that during the war, Ferris worked closely with Ng against the Japanese forces. When Ferris confirms the fact, the two British officials ask him to go into the jungle and contact Ng with a message from the British. They want to convey to the guerrilla leader that the British have sincere intentions of withdrawing from Malaysia and allowing the country to become fully independent. They also want the guerrillas to cease their attacks on the British military and the colonists in order to allow them time to organize their departure from Malaysia. The officials hope that Major Ferris can persuade Ng and the rebel guerrillas to co-operate. A few days later, Ferris sneaks into the jungle, alone, in search of his old war buddy, colonel Ng.

Also Featuring the Cast of The 7th Dawn 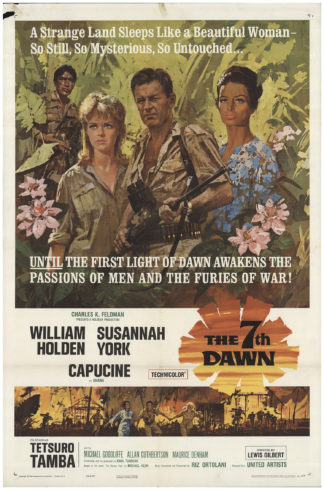