In 1964, a brash new pro boxer, fresh from his olympic gold medal victory, explodes on to the scene, Cassius Clay. Bold and outspoken, he cuts an entirely new image for African Americans in sport with his proud public self confidence with his unapologetic belief that he is the greatest boxer of all time. To his credit, he sets out to prove that with his highly agile and forceful style soon making him a formidable boxer who soon claims the heavyweight championship. His personal life is no less noteworthy with his allegiance to the Nation of Islam, his friendship with the controversial Malcolm X and his abandonment of his slave name in favour of Muhammad Ali stirring up controversy. Yet, at the top of his game, both Ali’s personal and professional lives face the ultimate test with the military draft rules are changed, making him eligible for military induction during the Vietnam War. Despite the fact that he could easily agree to a sweetheart deal that would have meant an easy tour of duty for himself, Ali refuses to submit on principle to cooperate in an unjust war for a racist nation that treated his people so poorly. The cost of that stand is high as he finds himself unable to legally box in his own country while his case is contested in court. What follows is a battle for a man who would sacrifice so much for what he believes in and a comeback that would cement his legend as one of the great sports figures of all time.

Also Featuring the Cast of Ali 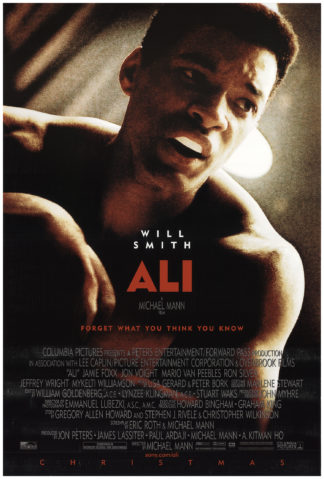