The Amorous Adventures of Moll Flanders (1965)

Based on Daniel Defoe’s 1722 novel of the famed English adventuress Moll Flanders. Moll is first engaged as a maid by an eighteenth-century English family chiefly composed of sex-starved males. She marries the imbecilic second son, who prefers booze to copulation. Too embarrassed to speak the truth of him, she demurely tells friends, “Modesty forbids me to reveal the secrets of the marriage bed.” She then meets a rich banker, becomes maid-companion to a count and his lady, and finally weds the banker, but leaves him on their first night together. She then joins a group of thieves, falls in love Jemmy, and becomes their number one asset before she is sent to prison. After she is released, she finds Jemmy, and, in the end, everyone is on an America-bound boat except the banker, who fortuitously dies of a heart attack before he has had an opportunity to alter his will.

Also Featuring the Cast of The Amorous Adventures of Moll Flanders 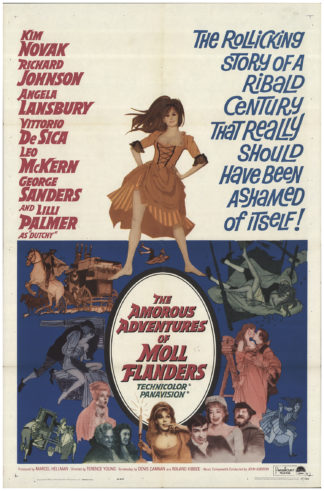 You're viewing: The Amorous Adventures of Moll Flanders $15.00
Add to cart