When virtually all of the residents of Piedmont, New Mexico, are found dead after the return to Earth of a space satellite, the head of the US Air Force’s Project Scoop declares an emergency. Many years prior to this incident, a group of eminent scientists led by Dr. Jeremy Stone (Arthur Hill) advocated for the construction of a secure laboratory facility that would serve as a base in the event an alien biological life form was returned to Earth from a space mission. Stone and his team – Drs. Dutton, Leavitt and Hall (David Wayne, Kate Reid, and (James Olson, respectively)- go to the facility, known as Wildfire, and try to first isolate the life form while determining why two people from Piedmont (an old wino and a six-month-old baby) survived. The scientists methodically study the alien life form unaware that it has already mutated and presents a far greater danger in the lab, which is equipped with a nuclear self-destruct device should it manage to escape.

Also Featuring the Cast of The Andromeda Strain 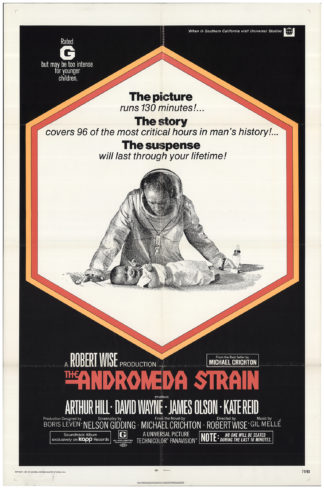 You're viewing: The Andromeda Strain $60.00
Add to cart