Steve Armstrong is a human short-order cook in a fast food restaurant on a “starstation” where the most popular arena fighting tournament in the whole galaxy is held. Members of various alien species fight one on one, often dirty, to become the ruling champions of the galaxy. The restaurant’s sole waiter and Steve’s boss is Shorty, a short four-armed scheming humanoid alien. When Steve saves Shorty from a particularly unpleasant and violent alien guest, they’re both fired by the restaurant’s automated A.I. for brawling. Shorty shows gratitude and they become friends. However, without jobs, they’ll both be kicked off the space station. Thankfully, Quinn, a human female no-nonsense fighting promoter, who’s in quick need of new fighters, hears about Steve’s fight with the alien guest and offers him sponsorship. Human fighters have traditionally been defeated easily by naturally tougher alien fighters in previous tournaments and Steve would be a real underdog. Shorty manages to convince Steve to take the offer and after some initial difficulties, Steve proves to be a really tough fighter with an actual tiny chance of success. In the eyes of humans all across the galaxy, who feel inferior to the various alien races, Steve becomes their idol and champion of humanity. Steve doesn’t really want all this attention, but he understands the hope people put in him. Rogor is the tournament’s crooked organizer, who’s complete control over the competition and the players is shaken by Steve’s surprising success. He offers one of his deals to Steve as well, but he refuses. Rogor then comes up with a plan to get rid of Steve for good, if he gets to the finals. Rogor’s rat-faced yesman Weezil is eager to help. Meanwhile, beautiful Jade attracts Steve’s attention.

Also Featuring the Cast of Arena 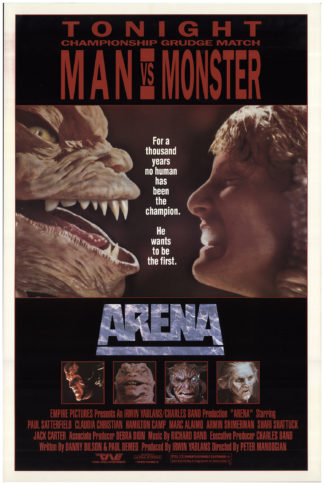