Atlantic City is a place where people go to realize their dreams, the promise of the future manifested by the demolition of the old crumbling buildings to be replaced by new hotels and casinos. Someone who recently came to Atlantic City for that promise is native Moose Javian (Saskatchewan) Sally Matthews, who currently works as a waitress at a hotel oyster bar, but who is training to be a black jack croupier and wants to be more cultured, such as learning French, in order to work at the casinos in Monte Carlo. Another dreamer who came to Atlantic City decades ago is Lou Pascal, who has long worked as a numbers runner and who claims to have been a cellmate and thus implied confidante of Bugsy Siegel. Although Lou still dresses to the standard to which he is accustomed, his dream long died as he only works penny ante stuff for Fred, most of his current income from being the kept man of widowed recluse, Grace Pinza. Grace too came to Atlantic City to fulfill her dreams – most specifically to participate in a Betty Grable lookalike contest – and ended up staying, marrying a player named Cookie Pinza. Sally, Lou and Grace all live in the same soon to be demolished apartment building – Sally and Lou who are next door neighbors – although Sally knows neither of her neighbors. Lou, however, secretly spies Sally through their respective apartment windows as she goes through a daily ritual. The dreams of this collective are potentially affected – largely dashed or reawakened – with the arrival into Atlantic City of Dave Matthews, Sally’s estranged, deadbeat husband, and his very pregnant new ageist girlfriend Chrissie, who happens to be Sally’s younger sister. It is the unknown to Sally that Dave and Chrissie bring with them that affects those dreams, namely a large cache of cocaine stolen from criminal sources. 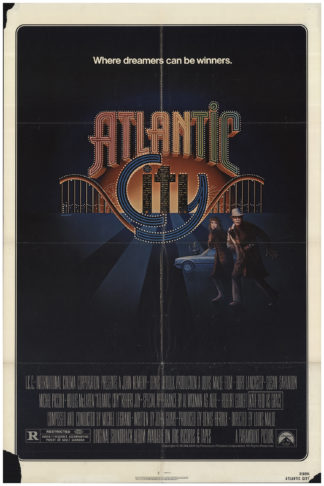