View cart “Bad Men of the Hills” has been added to your cart.

Condition Note: Condition: Good. Edge wear, wrinkling throughout, pinholes in all corners, missing paper in top left corner, tears along all borders, some scuffing and staining throughout, single-sided

U.S. Marshal Dave Upjohn arrives in Sundown to investigate reports of lawlessness and is met by Sheriff Mace Arnold and his deputy, Lefty Brant. Knowing that an investigation will disclose that they have being using their office to rob the ranchers, they murder Upjohn. When his son Steve, posing as Steve Carlton, learns of the murder, he vows vengeance. Arnold’s gang captures him, knocks him unconscious, ties him to his horse and then drives the animal into Chimney Hole, trusting that the canyon’s tough residents will kill him for prying into their affairs. Steve soon learns that, rather then being outlaws, the people of Chimney Hole are really upstanding ranchers who have fled there to get away from Arnold and his gang. At first, Steve suspects the leader, Lucky Shelton, of being responsible for the murder, but Harmony Haines, proves to him that Arnold was the man responsible. The ranchers agree to cooperate with Steve in an effort to drive Arnold from office. He and Lucky ride to town where they offer to pay Arnold $8,000 in “back taxes” as a bribe to make peace. When he accepts the bribe, the honest citizens break in and a gun-fight battle ensues.

Also Featuring the Cast of Bad Men of the Hills 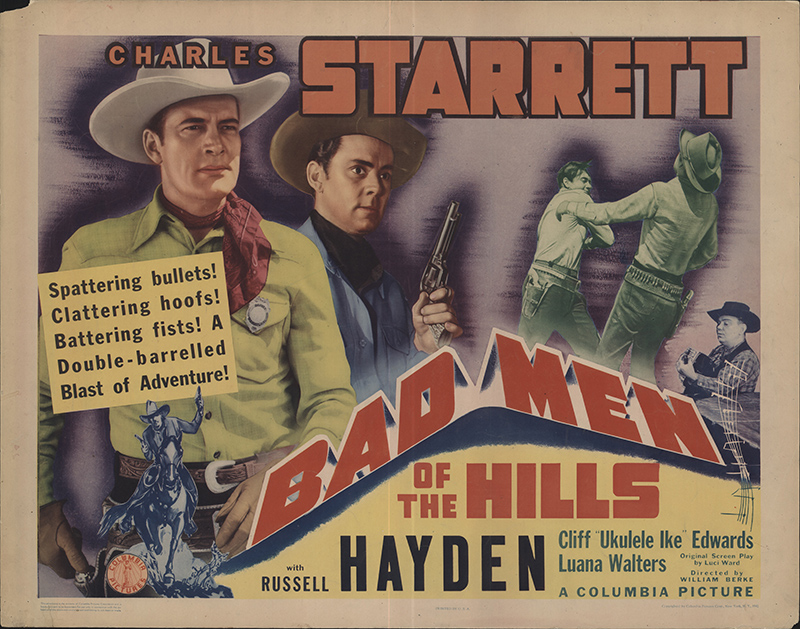