This is only the second Audie Murphy movie set in WWII after his autobiographical “To Hell and Back.” Here Murphy steps out of his usual kid-Western role to play a civilian working for the Navy helping supply guerilla insurgents in the Philippines. His sole motive is not politics nor bravery, but to find his bride from whom he was separated during the Japanese invasion two years before. Battle at Bloody Beach, the 1961 Richard Maibaum World War II (WWII) military action thriller (“These Were the Undefeatables… Hot-Blooded Heroes and a Blonde Tigress, Blasting Their Way to Victory With Bullets… Bolo Knives… And Bare Hands!”; “The Guts and Glory Story of the Undefeatables!”; “Fighting furies of the Pacific… The hot-blooded heroes and the blonde tigress who became the undefeatables!”; “BENSON …His backbone was all guts and courage!”; “SACKLER …His motto: ‘Fight like hell and love like hell!'”; “THE BLONDE TIGRESS …Brave as any man wild as any animal!”; “His brand of courage was undefeatable!”; “Blonde Tigress… and hot-blooded heroes…blazing and blasting the pacific wide open!”; “Story by Richard Maibaum”; “Screenplay by Richard Maibaum and Willard Willingham”) starring Audie Murphy (“His brand of courage was undefeatable!”; WWII’s most decorated war hero; after Murphy played himself in “To Hell and Back” he went on to a long career in movies, marred by his personal difficulties), Gary Crosby (“War and women were his way of life!”), Dolores Michaels (“She fought with fury and loved with passion!”), Alejandro Rey, Marjorie Stapp, and Barry Atwater

Also Featuring the Cast of Battle at Bloody Beach 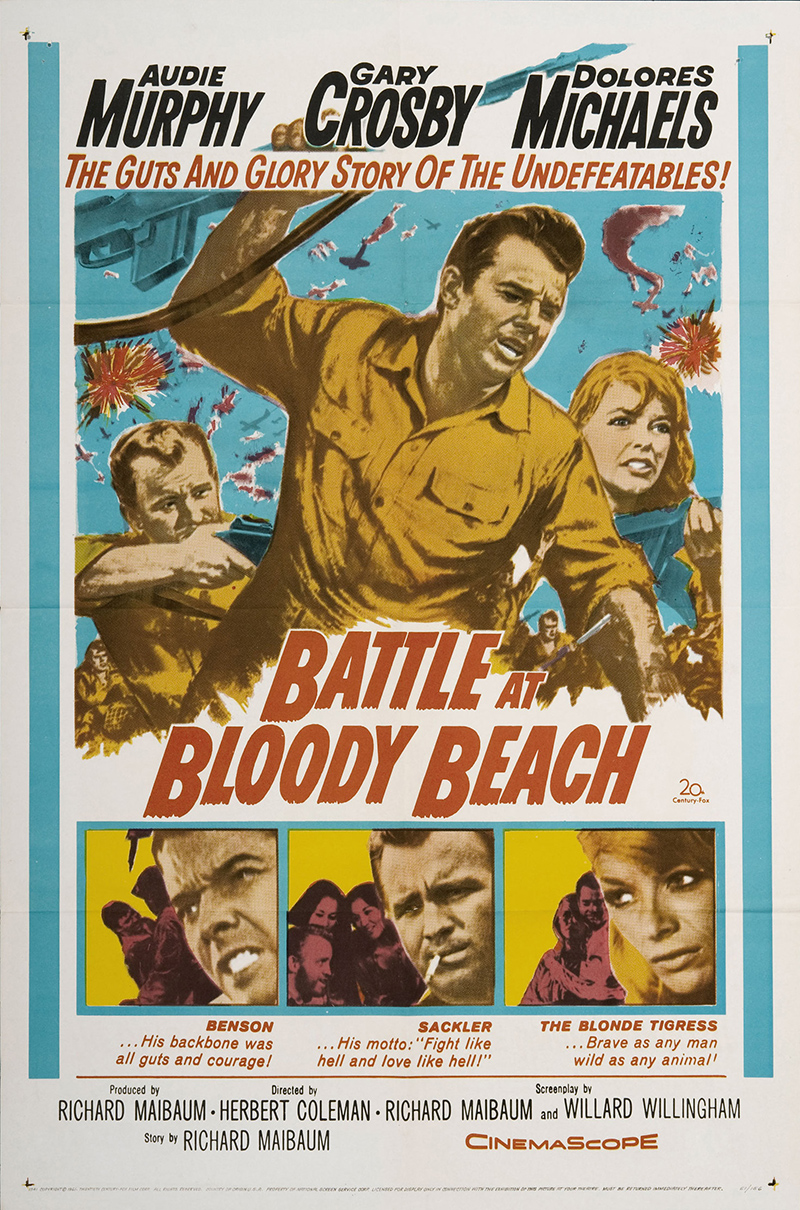 You're viewing: Battle at Bloody Beach $75.00
Add to cart