Forty-nine year old Bobby Bowfinger is the owner/president of a Hollywood-based production company, Bowfinger International Pictures. The company has yet to produce a film, Bobby’s personal net worth is virtually zero, and the company only has $2,184 to its name, $1 invested into it personally by Bobby every week since he first decided he wanted to make a movie when he was a child. Bobby believes his fortunes will change when his accountant Afrim changes hats and writes a science-fiction alien invasion screenplay that Bobby thinks all studios will clamor for and has Oscar written all over it. He has a small stable of followers who support his vision in being part of this movie, which eventually includes Daisy as the lead actress, she a stereotypical small town girl looking to make it big in Hollywood. Having just arrived in town, she does not know her way around the Hollywood system,… except on her proverbial back. Bobby is not averse to telling bald-faced lies in his singular focus in getting the picture made and distributed all on this $2,184 as a starting point. It is using several of those lies that he is able to get a verbal confirmation from big studio executive Jerry Renfro to distribute the movie *if* it stars Kit Ramsey, arguably the biggest action star in the world. Using similar lies, Bobby, however, is unable to convince Kit to star in the movie. Kit, who has a weakness for the Laker Girls, is a self-absorbed and paranoid movie star whose life and thus career is largely directed behind the scenes by Terry Stricter, the head of a new age religion called MindHead. Bobby comes up with a scheme that he believes will get around Kit not agreeing to star: film Kit without him knowing that he is being filmed. The only person who knows of the scheme is Dave, Bobby’s lowest of low level inside man turned cinematographer who has unofficial (i.e. technically stolen and thus free) access to studio camera equipment and general knowledge of Kit’s general day-to-day movements through the studio system. Bobby is able to convince all the other actors that Kit’s acting process involves he not interacting with them outside of filming the specific scenes he has with them. Part of Bobby’s scheme involves using Kit’s general paranoia that aliens truly are invading the planet to get his gut reactions to what is happening within the context of the script. But Bobby knows he has to get Kit to scream the closing lines of the movie “gotcha suckas” for the movie to be a success. Complications ensue when another of the the actors, Carol, tries to go against Bobby’s policy of not making contact with Kit outside of filming, and when Bobby is required to hire a production assistant cum stunt double cum acting double, whose job in part is to stand-in for the requisite Kit Ramsey naked ass shot. Through it all, Bobby will know if he has made it in Hollywood if he gets a specific sign specifically from the heavens in the form of FedEx.

Also Featuring the Cast of Bowfinger 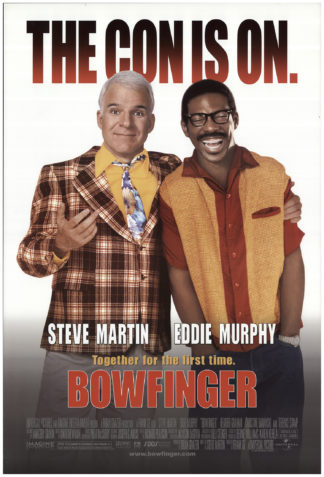