After the American Civil War, many freed slaves head out West in search of free land and a better life. Former slave and Union Army sergeant Buck becomes a self-employed wagon master to wagon trains of freed slaves heading West. Buck knows the region well and he charges fair wages from the wagon trains employing him. He also has a working relationship with the local Indian tribes that charge trespassing fees from the wagon trains heading West across Indian lands. In return, they allow the settlers to move across Indian territory unhindered and to hunt a few buffalo needed to feed the wagon train settlers. However, not everyone in the region is friendly toward the black settlers traveling West. Owners of Southern plantations, dismayed by the loss of slave manpower that previously worked the plantations for free, hire band of white rogues and outlaws to prevent former black slaves from going West. In order to achieve this aim, the hired bands of rogues attack wagon trains and destroy the wagons, the supplies and the food resources of the former slaves. They threaten the black settlers with harm and they tell them to return to the Southern states where they came from and work the plantations. Wagon master Buck encourages the freed slaves to continue their trek westward and to not give up their dream of settling in the West. Knowing this, the band of rogues led by DeShay plans to capture and kill Buck. The DeShay gang sets up ambushes and traps but Buck always manages to avoid capture. The gang resides in the town of Copper Springs where the sheriff, an honest man, doesn’t agree with the gang’s ruthless tactics against wagon trains of freed slaves. Chased by the DeShay bunch, wagon master Buck and his tired horse arrive at a river where a black preacher, Reverend Willis Oakes Rutherford, is bathing. A desperate Buck switches horses with the preacher, against the man’s will, and rides off to meet his wagon train. The preacher heads to Copper Springs where he bumps into DeShay’s gang. Recognising Buck’s horse, the gang interrogates the preacher about Buck’s whereabouts. DeShay promises a 500 dollar reward to the preacher if the preacher finds Buck and captures or kills him. DeShay also instructs the preacher to convince all black settlers to turn back east toward the Southern plantations and abandon their trek Westward. The preacher agrees with DeShay and leaves town. Outside town he meets a wagon train formed of freed slaves and led by none other than Buck. After an angry exchange between the preacher and Buck, the preacher joins the wagon train. During the following days of travel, the preacher notices that all the money of the wagon train is kept in a money belt carried by one of the women around her waist. A few days later, a distrustful Buck orders the preacher to leave the wagon train and he himself rides away to scout the area and to pay in cash a right of passage to the local Indian tribe in behalf of the trespassing wagon train. The preacher follows Buck and he witnesses the payment made by Buck to the Indian chief for safe passage of the settlers. When Buck, followed by the preacher, returns to the wagon train, a gruesome scene awaits. DeShay’s gang attacked the wagon train, stole the settlers’ money, destroyed their food and supplies and even killed a few settlers. Heartbroken, the surviving settlers want to turn back but Buck encourages them to go on. Angry at the devastation, Buck and the preacher decide to ride to the town of Copper Springs and exact revenge on DeShay’s gang and also try to retrieve the money DeShay stole from the black settlers. There only are two against many but Buck and the preacher are determined to do it.

Also Featuring the Cast of Buck and the Preacher 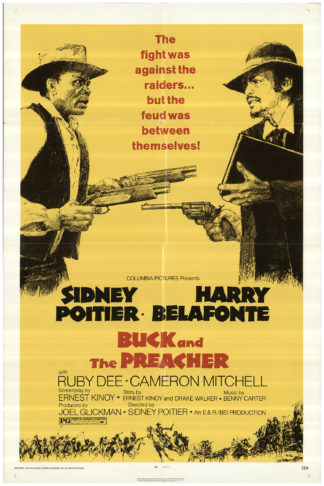