Condition Note: Condition: Very Good to Fine. Some edge wear, some scuffing throughout, stain in middle of card, pinholes throughout, some creasing in corners, single-sided. Stored flat

Sunset Carson’s first western and, despite the misleading video box that indicates otherwise, he was billed as Sonny Carson and was billed 2nd behind Smiley Burnette. Republic dropped the “Sonny” but he was also billed beneath Burnette in three more films—Bordertown Trail, Code of the Prairie and Firebrands of Arizona—released between July and December of 1944, when Burnette and Republic parted company and Carson was given his own series that featured no continuing sidekick actor. Burnette was off the screen from that point until February of 1946 when he made the first of his co-starring Durango Kid films with Charles Starrett. This film finds Sunset Carson (Sunset Carson) meeting and teaming up with Frog Millhouse (Smiley Burnette) who is driving supplies in to Placer City for wealthy mining-equipment man J. B. Murdock (Harry Woods). Through a runaway horse ruse, the supplies are hi-jacked by Marjorie Malloy (Ellen Hall and her companion Ned Crane (Kirk Alyn’). Murdock has foreclosed on most of the miners on Round Nugget Hill and is withholding needed supplies from the rest. Marjorie and Crain are robbing Murdock’s wagons to give supplies to the miners. Murdock and kindly-town doctor Lee (‘Frank Jaquet’) are in cahoots to take over all the local mining operations, but Sunset and Frog, with whiskers and posing as a French mining engineer, soon have all the wrongs righted.

Also Featuring the Cast of Call of the Rockies 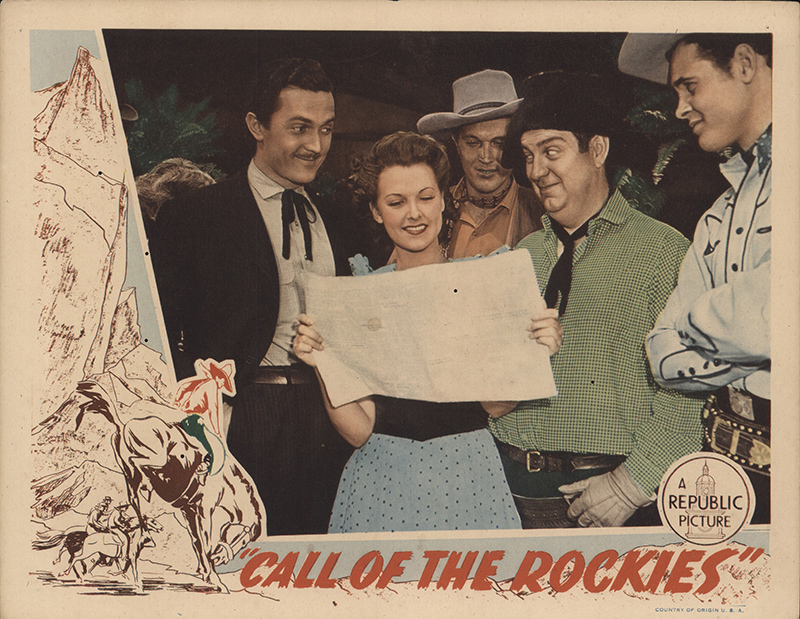