Dan, a TV talk show host from New York is told by doctor to take a break. So he goes to Arizona and as he arrives, the press who were expecting a politician to arrive from Washington hound him and when a reporter asks his opinion about the Indians he empathizes with them. That’s when an Indian girl approaches him and asks him if they can talk. He says yes go to his place and when he arrives he finds the girl dead. He tries to call the police but when they arrive the body is not there. Later he goes driving and the Sheriff stops him and finds the body in his car. He’s arrested but a wealthy rancher shows up and tells the Sheriff to release him which he does. And he later finds a girl staying in his house and she says she’s the rancher’s daughter. Later Dan’s wife shows up, it seems like their marriage is going through a rough patch but she’s more concerned with trying to prove bis innocence. So they start bu talking the dead girl’s uncle who doesn’t know much but tells them of a wise old man who might be able to help them. They later do more snooping and clearly someone doesn’t want them to do that.

Also Featuring the Cast of Cancel My Reservation 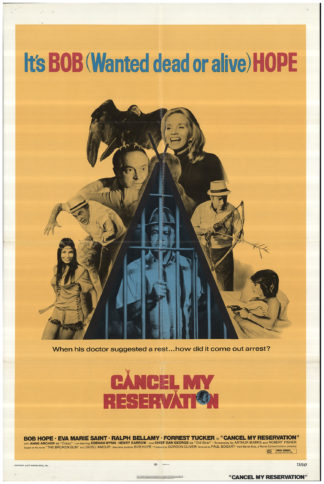 You're viewing: Cancel My Reservation $25.00
Add to cart