Condition Note: Condition: Good to Very Good. Some edge wear, some scuffing throughout, some creasing in corners and across top section, some staining along borders, pinholes throughout, single-sided. Stored flat

Billy the Kid (Buster Crabbe) and Fuzzy Jones (Al St. John) are on their way out of Arizona being chased by some riders who hope to cash in on the reward money for their capture. They are warned in time by Ed Dawson (Hansel Warner), but Ed is wounded in the getaway. They get a doctor (John Elliott) to attend to Ed. The latter tells them there is a range war in progress across the border and that he is looking for men to help make a cattle drive to the rail junction. Agreeing to help, they head for the Dawson ranch and run across a Dawson man who has been killed from ambush. Mary Dawson (Frances Gladwin), Ed’s sister, thinks they did it but they convince her of their innocence. The news of the killing causes ranch foreman Brandon (Charles King), secretly working for the rustlers, to try and get the rest of the Dawson hands to quit, but Billy intercedes and agrees to take the cattle through for Sam Dawson (Ed Cassidy). Brandon and Coulter (Glenn Strange) have their henchmen stampede the cattle on the drive and Elkins (Frank Ellis), one of Coulter’s men, meets with Billy after the stampede and suggests his boss will buy up what cattle are left. Fuzzy also meets a couple of ranchers who have had the same proposition made to them. Coulter later recognizes Billy as the wanted Billy the Kid, and makes an offer for them to work together. Billy sees this as a way to smash the gang and agrees, provided he gets a cut of the Dawson herd. Billy and Fuzzy hold up a stage to keep the cattle money out of the hands of the Coulter gang, but Coulter, realizing he has been double-crossed, kidnaps Mary. 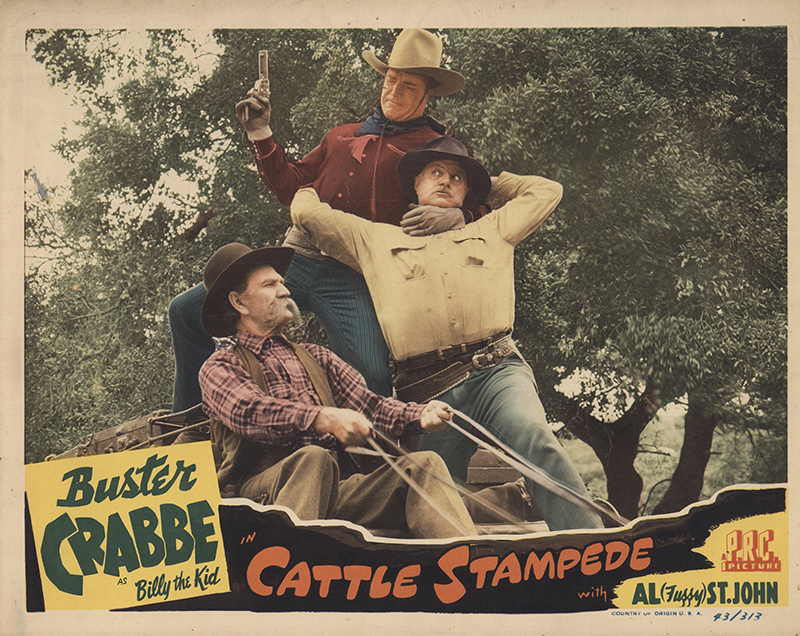