Arizona Territory is in the grip of outlaw terror and killer outlaws, secretly organized by Hulon Champion, who covers his power ambitions with the guise of a respectable firearms merchant. Newspaper editor Fred Gately is killed by Champion’s henchman Curt Watson when Gatley makes a public appeal to the President of the United States on the front page of his Bolton City News. After his death, his daughter Ann and his assistant Nugget Clark carry on his efforts and are rewarded when they receive word that the President will journey to the territory in response to their plea. Champion immediately sets in motion a scheme to assassinate the President by putting himself in the good graces of Major Oliver Duncan who is to facilitate the trip. Champion’s henchmen intercept and wipe out the detail led by Lt. John Case, Ann’s sweetheart, who is bearing sealed orders regarding the trip. He pins suspicion on Case. Rocky Lane, a lieutenant in the U.S. Cavalry Intelligence, working incognito, is riding to deliver a map of the secret route and is attacked by Watson, but escapes. Rocky then begins to uncover Champion’s trail of deceit and villainy, but Champion is still loose to make an attempt on the President’s life.

Also Featuring the Cast of Code of the Silver Sage 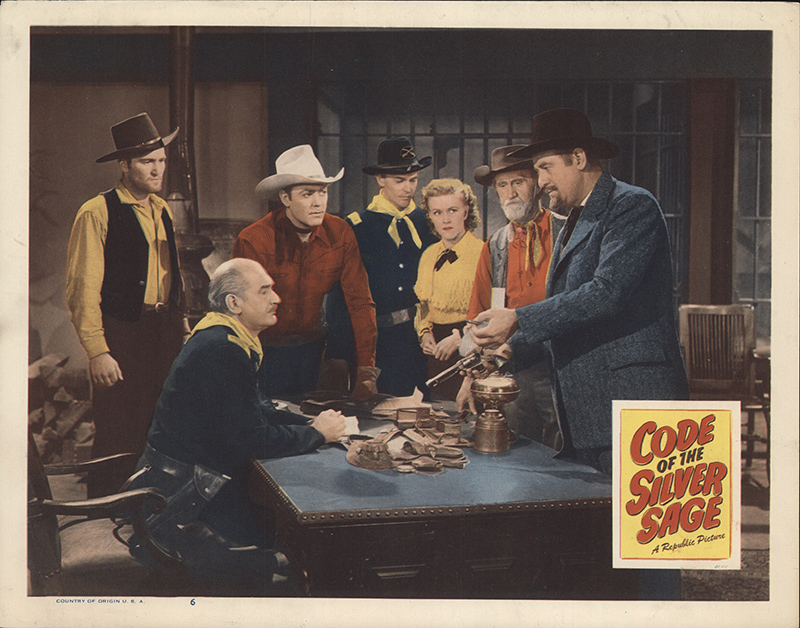