David Wilkerson is a relatively young parish priest in Philipsburg, Pennsylvania. With nominal funds, insufficient even to get a hotel room which forces him to sleep in his car, his church sends him to the slums of New York to bring the word of God to the young men and youth of the Egyptian Kings, who are on trial for their violent gang activities. David hopes God will be their salvation. Although David is not allowed to get near the Egyptian Kings, his trip to the courthouse does garner much publicity. Because of that publicity, David meets a tough street youth named Little Bo, who offers to introduce David to the main gangs still out on the streets, namely the mixed white Mau Maus, and the predominantly black Bishops, who are fighting each other for territory. Who the gangs hate more than each other however are the authorities. David turns his attentions to the two gangs, and wants them to know that God loves them no matter who they are or what they do, and in doing so will guide them to make the right choices in life. He and his messages may be difficult to penetrate into the groups, but the general consensus is that if he can get through to Nicky Cruz, one of the leaders of the Mau Maus, he will be able to get through to anyone. But David hopes to get through to them all, at his own risk, especially as Nicky continually threatens him. Another that he sees who is especially in trouble is Rosa, Nicky’s “girl” who will do anything to get the money to get her two per day heroin fixes.

Also Featuring the Cast of The Cross and the Switchblade 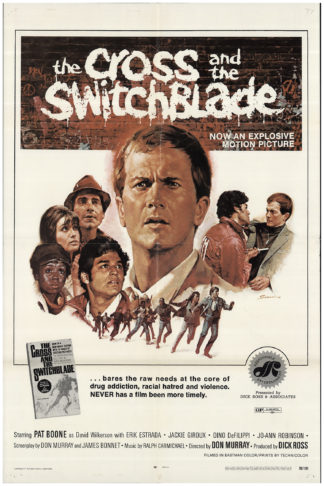 You're viewing: The Cross and the Switchblade $20.00
Add to cart