Condition Note: Condition: Fair to Good. Heavy edge wear, heavy fold wear, some fold separation, heavy wrinkling and some scuffing throughout, some staining in top and bottom sections, creasing in some corners and borders, tears on left and right borders and top border, double-sided, stored folded

In 1978, in Broadway, the decadent and narcissist actress Madeline Ashton is performing Songbird, based on Tennessee Williams’ Sweet Bird of Youth. Then she receives her rival Helen Sharp, who is an aspiring writer, and her fiancé Ernest Menville, who is a plastic surgeon, in her dressing-room. Soon Menville calls off his commitment with Helen and marries Madeline. Seven years later, Helen is obese in a psychiatric hospital and obsessed in seeking revenge on Madeline. In 1992, the marriage of Madeline and Menville is finished and he is no longer a surgeon but an alcoholic caretaker. Out of the blue, they are invited to a party where Helen will release her novel Forever Young and Madeline goes to a beauty shop. The owner gives a business card of the specialist in rejuvenation Lisle Von Rhuman to her. When the envious Madeline sees Helen thin in a perfect shape, she decides to seek out Lisle and buys a potion to become young again. Further, she advises that Madeline must take care of her body. Meanwhile Helen seduces Menville and they plot a scheme to kill Madeline. When Madeline comes home, she has an argument Menville and he pushes her from the staircase. She breaks her neck but becomes a living dead. When Helen arrives at Menville’s house expecting that Madeline is dead, she is murdered by Madeline. But she also becomes a living dead and they conclude they need Menville to help them to maintain their bodies. But Menville wants to leave them.

Also Featuring the Cast of Death Becomes Her 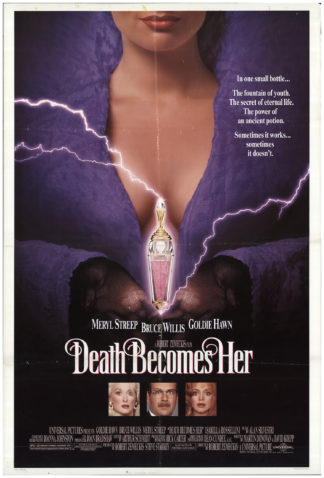