Open-minded architect Paul Kersey returns to New York City from vacationing with his wife, feeling on top of the world. At the office, his cynical coworker gives him the welcome-back with a warning on the rising crime rate. But Paul, a bleeding-heart liberal, thinks of crime as being caused by poverty. However his coworker’s ranting proves to be more than true when Paul’s wife is killed and his daughter is raped in his own apartment. The police have no reliable leads and his overly sensitive son-in-law only exacerbates Paul’s feeling of hopelessness. He is now facing the reality that the police can’t be everywhere at once. Out of sympathy his boss gives him an assignment in sunny Arizona where Paul gets a taste of the Old West ideals. He returns to New York with a compromised view on muggers… 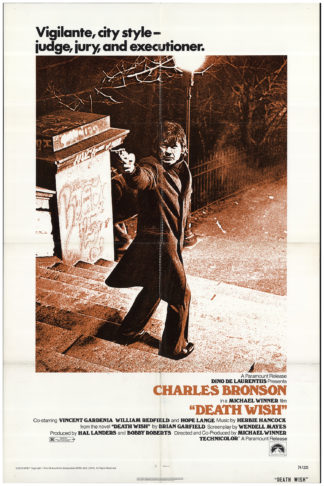