When the terrorists Abdul Rafai and Mustafa hijack a Boeing 707 in Athenas with 144 passengers and crew, they use a grenade to force Captain Campbell to fly to Beirut, Lebanon, instead of to Rome and New York. Meanwhile the Delta Force commanded by Colonel Nick Alexander and Major McCoy are assigned to resolve the situation. Abdul and Mustafa separate the Jewish and Marine passengers and they are transported to Beirut, while twelve other terrorists embark on board. Then they fly to Algiers, where the women and children are released. McCoy and the Delta Force team are prepared to attack the plane when Alexander learns that there are now fourteen terrorists on board and not only two, and he aborts the mission. Abdul kills a Marine and returns to Beirut with the male passengers on board. Now the Delta Force needs to act in two locations crowded of terrorists to release the hostages. Will they succeed?

Also Featuring the Cast of The Delta Force 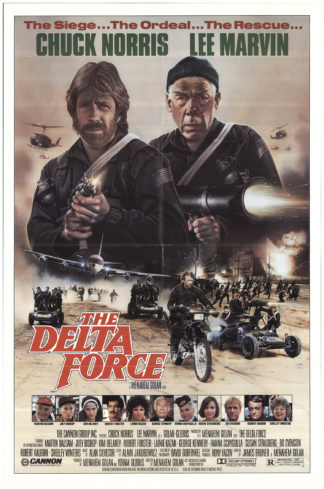