Floridian filmmaker William Grefé’s previously lost “true crime” roughie THE DEVIL’S SISTERS makes its digital debut (well, most of it) via special features producer Ballyhoo Motion Pictures. When her policeman boyfriend Antonio (Frank Pinero, Grefé’s DEATH CURSE OF TARTU) dumps her for spurning his more physical advances, virginal Teresa (Sharon Saxon) decides to go to Tijuana and look for a job. She answers a newspaper ad seeking an attractive young woman to help with “extensive domestic and social activities” and soon finds herself locked in a bedroom cell and forced to service the paying customers of hostess Rita Alvarado (Anita Crystal). Teresa seeks solace in alcohol and cigarettes until Antonio turns up as a paying customer, calls her a “money-hungry whore” and refuses to help her. Rita’s ever-watchful henchman Jose (William Marcos) informs her that the policeman recognized Teresa, so the girl is spirited away to “The Ranch” where Rita’s sister Carmen (Floridian TV actress Velia Martinez) sells girls to the highest bidder while her cigar-chomping henchwoman Marta (Mildred Rodesky) “treats” the girls who have had the misfortune to get pregnant and meats out punishment to those who try to escape. When Teresa and Emilia (Nora Alonzo, Grefé’s WILD REBELS) fail to fetch 500 pesos from an “Englishman” (Michael DeBeausset, the Florida-shot HONEYMOON OF HORROR) and Emilia is killed trying to escape, Teresa’s survival becomes less certain (her own escape attempt is punished with a barbed wire-wrapped nap on “The Royal Marriage Bed”). Will Teresa escape “The Ranch” or will she be digging her own grave next? 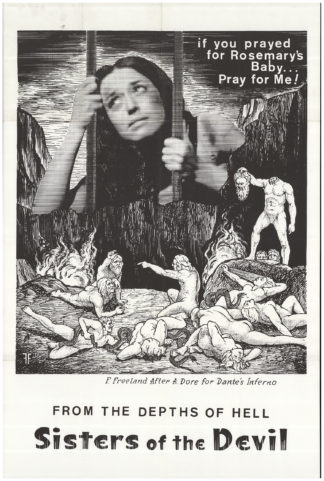