Following the death of his son, in a skiing accident in the Austrian Alps, the cold and emotion-less Dan Slater travels to Austria for the funeral. In the face of official indifference he decides to investigate and little by little strange inconsistencies start to appear leading Dan to conclude that the death of his son was no accident. A retired, former undercover operative, Frank Wheatley, whom he had hoped would watch out for his son proves useless as Dan seeks out the murderer’s. Eventually, Dan finds Gina, the companion of wealthy socialite Mrs. Carrington, who puts him on the correct trail little realizing that he is falling into a cunning, cleverly thought out trap laid by Berthold. Berthold hopes to kidnap Slater and substitute him with an exact double in order to obtain a mole in the highest echelons of the CIA. Will he succeed or will Frank and Gina realize something is amiss and rescue Slater?

Also Featuring the Cast of The Double Man 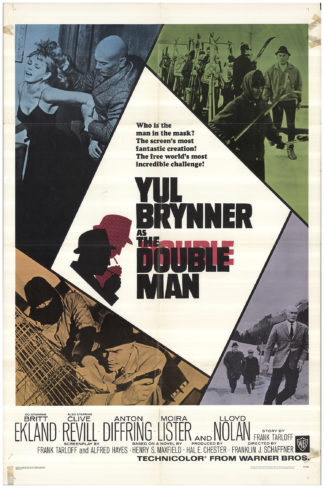