October 1944 in war torn Italy. Hana, a French-Canadian nurse working in a mobile army medical unit, feels like everything she loves in life dies on her. Because of the difficulty traveling and the dangers, especially as the landscape is still heavily booby-trapped with mines, Hana volunteers to stay behind at a church to care solely for a dying semi-amnesiac patient, who is badly burned and disfigured. She agrees to catch up to the rest of the unit after he dies. All the patient remembers is that he is English and that he is married. Their solitude is disrupted with the arrival at the church of fellow Canadian David Caravaggio, part of the Intelligence Service, who is certain that he knows the patient as a man who cooperated with the Germans. Caravaggio believes that the patient’s memory is largely in tact and that he is running away from his past, in part or in its entirety. The patient does open up about his past, all surrounding his work as a cartographer in North Africa, which was interrupted by the war. He may not be running from his work as a spy for the Germans as Caravaggio believes, but rather the memory of an affair he had with married Katherine Clifton, the love of his life, and the memory of a promise not totally fulfilled. Hana may also test her theory of her fates with love and death as she embarks on a relationship of her own with Kip Singh, a Sikh from India, whose unit has camped on the now overgrown lawn of the church. Their work entails sweeping for and diffusing mines, the discovery of one such mine which had earlier saved her life.

Also Featuring the Cast of The English Patient 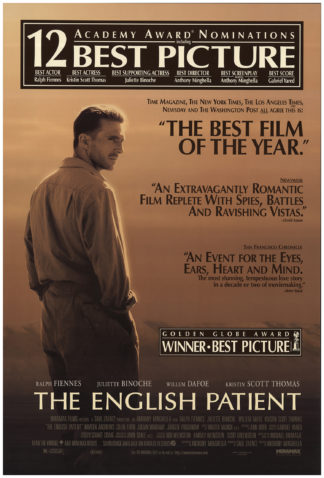 You're viewing: The English Patient $45.00
Add to cart