Karen McCann’s eldest daughter is raped and murdered whilst on the phone with her. When the case against Robert Doob, the perpetrator, is dismissed because of a technicality, she starts following him and sees how he checks out his next victim, a woman he delivers groceries to. She tells the police, but is only warned she must stop following Doob. When she tries to warn the woman, she is shooed out of the house. Doob, having found out that Karen is following him, threatens to do something to her youngest daughter. She then seeks help from a group of vigilantes connected to a support group, in order to shoot Doob. However, a friend from the support group turns out to be an FBI agent investigating the very vigilante activity Karen is involved in and warns her that she will go to jail for the rest of her life unless it is self-defense. In the meantime, tension grows between Karen and her husband Mack, because he finds out she has secretly been taking self-defense classes and has been learning how to use a gun. When Doob makes another victim and is again released for lack of evidence, she finds a way to lure him into her house and kill him in self-defense.

Also Featuring the Cast of Eye For An Eye 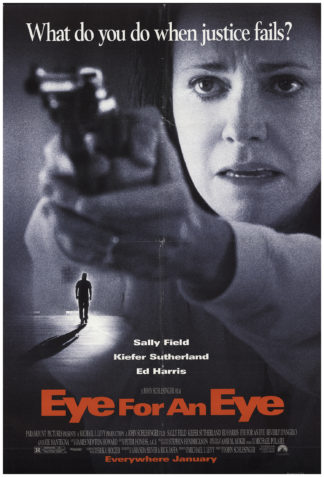