In 1876, the Missouri legislature issues a pardon and amnesty to the James and Younger gangs despite many people considering them outlaws. The pardon is because they protected the homesteaders of Clay County against the marauding railroaders, who wouldn’t let anyone or anything get in their way of building the railroad where they wanted. However, the railroad companies and banks still consider them outlaws and will take matters into their own hands if they come across the gangs. Prior to the pardon, Cole Younger had contemplated robbing the First National Bank in Northfield, Minnesota – what is considered the largest bank west of the Mississippi – but has now decided against it. Circumstances, including learning that Jesse James and his gang are going ahead with the robbery behind his back, and that the railroaders issuing a war against them which also includes bribing the legislature to revoke the pardon, make Cole change his mind. But right from the start – even during the planning stages – things don’t go quite according to script, which may be an omen for things to come.

Also Featuring the Cast of The Great Northfield Minnesota Raid 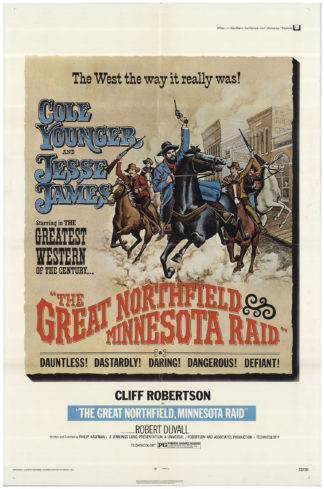 You're viewing: The Great Northfield Minnesota Raid $35.00
Add to cart