View cart “Gunfire” has been added to your cart.

Condition Note: Condition: Fair to Good. (Card 2). Some edge wear, some scuffing throughout, large tear in top middle section with tape reinforcement on back, some creasing in all corners, small tears bottom left border and bottom right border, single-sided

Another in the series of Don Barry starring films (who NEVER used Don ‘Red’ Barry as his billing except in his series of Republic westerns from 1940-44 and the serial “The Adventures of Red Ryder”), financed by Robert L. Lippert and produced by William Berke all as A Donald Barry Production in the late 40’s and early 50’s, this one pretty much follows the semi-inaccuracies and myths found in the vast majority of the films about Billy the Kid, while adding a narration – a trend found in many B-westerns of this period evidently under the mistaken impression it would add some class to the proceedings. It didn’t. And having a 38-year-old actor play an outlaw who died when he was 21 gave Barry an opportunity to darken his hair to nearly black and pull out, what appears to be, the forelock hairpiece he used for the Red Ryder serial in 1940 to make him look more like the character as drawn by Fred Harman. It didn’t make him look much like the real Billy the Kid, though.

Also Featuring the Cast of I Shot Billy The Kid 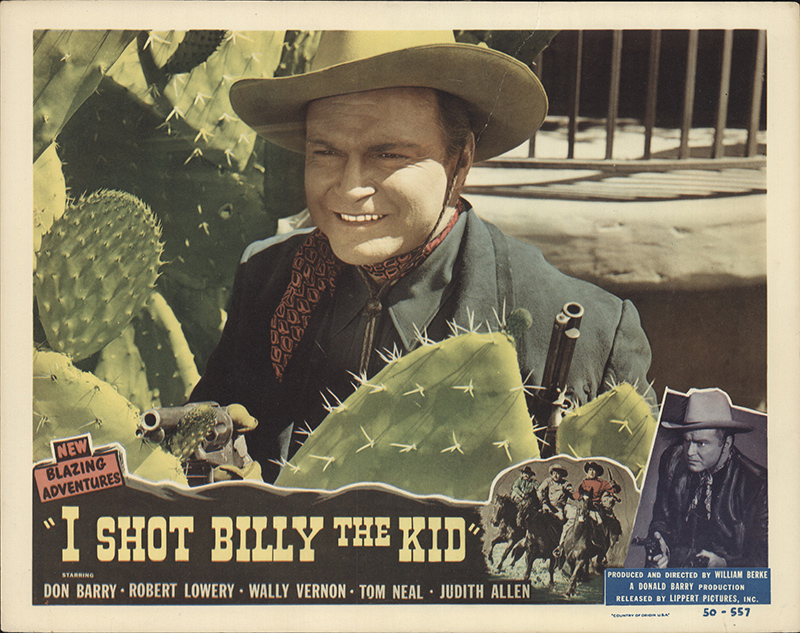