Condition Note: Condition: Fair to Good. Previously folded, fold wear, Slight fold separation, edge wear, wrinkling and some scuffing throughout, creasing in some corners and along some borders, tears on left and right borders, pinholes in corners sections and top border with some missing paper, single sided, stored rolled

Natty Gann (played by Meredith Salenger) is a twelve year old Depression era girl whose single-parent father leaves her behind in Chicago while he goes to Washington State to look for work in the timber industry. Natty runs away from the guardian she was left with to follow Dad. She befriends and is befriended by a wolf that has been abused in dog fights, hops a freight train west, and is presumed dead when her wallet is found after the train crashes. Dad gets bitter and endangers himself in his new job. Meanwhile Natty has a series of adventures and mis- adventures in various farmhouses, police stations, hobo camps, reform schools, and boxcars.

Also Featuring the Cast of The Journey of Natty Gann 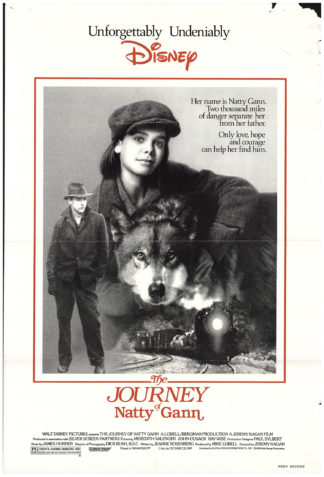 You're viewing: The Journey of Natty Gann $15.00
Add to cart