In 1877, Dan Blaine is the Marshal of the Southwestern town of Suwora. Blaine is a former gunfighter who served 10 years in prison for bank and stagecoach robbery. However, he went straight and became a Marshal. He also is one of the fastest draws in the territory. His reputation attracts the occasional youngster who wants to make a name for himself by outdrawing and killing Blaine. Lot McGuire is such a young man. He’s riding to Suwora to challenge Marshal Blaine to a gunfight. Lot McGuire is fast and he thinks he can outdraw the famous Marshal. The irony of fate brings the two men in contact at a fishing spot outside the town. There, on the banks of the river, they become friends, share a meal and exchange stories. Young McGuire reveals his intentions to Blaine who, in turn, reveals to McGuire the fact that he is the town Marshal. McGuire thanks Blaine for the meal but is determined to challenge Blaine to a gunfight. McGuire leaves the river bank camp promising to kill Blaine. The Marshal tries to reason with McGuire by pointing out the fact that he’s faster with the gun than McGuire and he would feel bad to kill McGuire. The Marshal sees in McGuire the kind of youngster he himself once was. A stubborn McGuire refuses to forgo the challenge. The two men will later meet in Suwora. Who will prove to be the faster draw?

Also Featuring the Cast of The Last Challenge 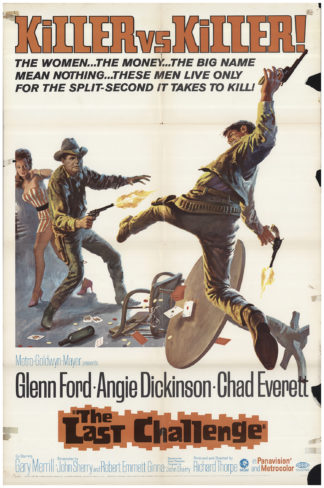