In the days before the Civil War, young William F. Cody, later to become famous as Buffalo Bill, and his father are returning to Kansas from the Colorado goldfields where they have struck it rich. Their wagon train is attacked by bandits, Bill is knocked out and his father killed. When he cones to, he finds a clue to the raiders’ identity – a key to Room 5 in the Swiftwater Hotel, Kansas. He arrives in Swiftwater and finds the townspeople sharply divided between Union and Confederate factions, with both sides being raided by a band claiming to be working for the Southern cause. At the hotel, Bill meets boyhood friend Wayne Calvert, lawyer Quentin Morrell and Otis Ellis, the hotel proprietor. He learns that Room 5 belongs to Morrell, and is caught searching it by Morrell, who is in love with Bill’s former fiancée Ann Calvert, but talks his way out of the predicament. He later spies on a secret meeting at the barn of Clete Larrabee, where he finds the strong box stolen from his wagon. The night war is declared, Wayne discovers that Morrell is the leader of the raiders claiming to be working for the Southern cause as soldiers and joins them as does Bill. Later, after Morrell attacks a Confederate supply train, Wayne tries to quit but Morrell is holding his sister hostage. Bill, having gotten the information he was seeking that links Morrell and Larrabee to the killing of his father, rides with Otis to free Wayne and Ann.

Also Featuring the Cast of Law of the Golden West 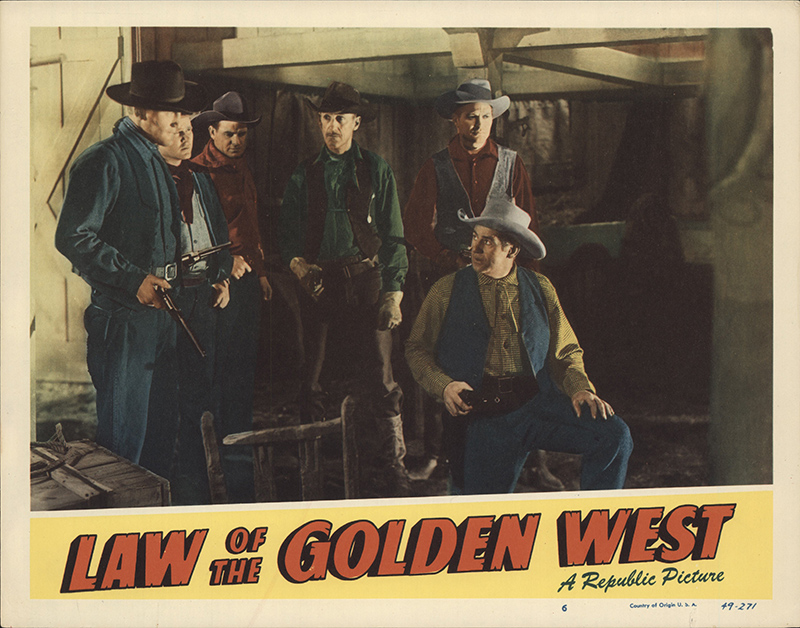