Condition Note: Condition: Good to Very Good. Previously folded, some fold wear, edge wear, some wrinkling and scuffing throughout, some staining along borders, tears and creasing on all borders with some missing paper, single-sided, stored flat

Twenty-eight year old Jeannie MacLean has led a simple life taking care of her frugal grandfather in the small town of Heatherdale, Vermont. After her grandfather passes away, Jeannie, who has no money even to pay the funeral bills, learns that he has left all of his money to her, money she didn’t know he had, in the amount of $4,952, which to her is a small fortune. Before she settles down with whatever she will now do instead of taking care of him, Jeannie decides to take a trip to Scotland, most specifically to Edinburgh as a jumping off point to where their ancestors are from, namely Loch Lomond. En route via Paris (the only last minute flight she can get), she meets American inventor and businessman Stanley Smith from Boise, Idaho, he who is going to Paris on business in trying to sell a combination washing machine/ironing machine he invented. He becomes her knight in shining armor as he helps her, unaccustomed to the ways of travel, with one bind after another all the way to Edinburgh, where his business does eventually take him. Just as they both believe they may be truly falling for each other, other people enter the picture who could upset that happily ever after ending for them. For Stanley, that person is a French model named Helene, her flaming red hair and voluptuous figure which is the type of woman to who he is usually attracted, but with who things never seem to work out. For Jeannie, that person is Scottish Lord James MacNairn, who admits he has a title, a broken down castle and standing, but not the money to go along with it.

Also Featuring the Cast of Let’s Be Happy 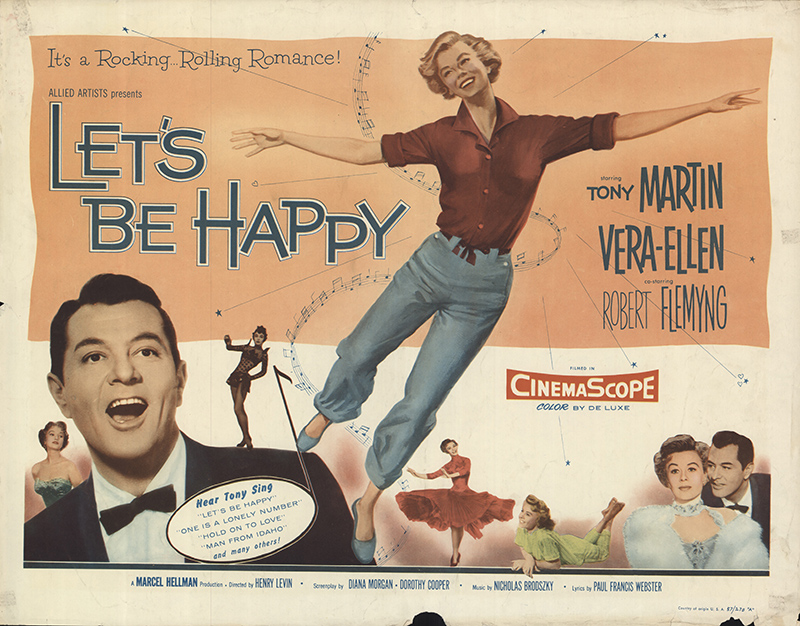