It’s the frontier of the American west. Shortly after being released from prison where he was serving a sentence for murder, Jay Grobart leads a band of three other men – Dawes, Billy Bowen and an Indian named Charlie Bent – in robbing a train of its Wells Fargo cargo of $100,000. In their escape from the scene, they are forced out of circumstance to take along a young woman, against her will, she who is traveling by herself on horseback. She is Mrs. Willard Crocker – Catherine – who they can tell is wealthy. Although they do not let her go, she vows that she will not tell the authorities about them as she, like them, is running away. As Jay, the leader, embarks on his next mission – to fulfill the reason he stole the money – he has the problems of managing the three men, Dawes and Billy in particular who are solely out for their own selfish wants which now includes their carnal wants with Catherine, and making sure Catherine does not escape. But as they spend more time together and learn more about what is under the surface, Jay and Catherine start to fall for each other. In addition to carrying out Jay’s mission, they thus want to figure out a way to be together in light of their present circumstances. Meanwhile, Harvey Lapchance, the investigator for Wells Fargo, has a posse of men on their trail. That posse includes Willard Crocker, a mining executive. Lapchance allows Crocker to come along despite he having the feeling that he is not solely looking out for his wife’s best interest.

Also Featuring the Cast of The Man Who Loved Cat Dancing 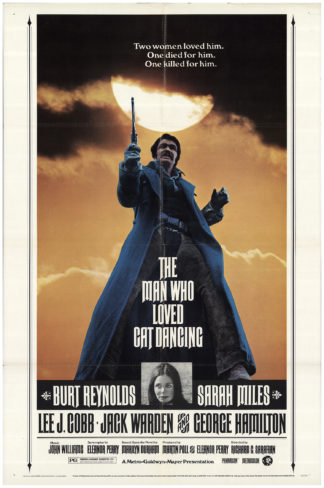 You're viewing: The Man Who Loved Cat Dancing $25.00
Add to cart