When Benjie, a black man who fought in the Civil War, returns to the southern town of Ironside, his return is not exactly a welcome one. The citizens are already uptight about the color of his skin…but the fact that he fought for the Union Army and still wears his uniform is all that is needed for hatred and violence to be fanned by an ex-Confederate soldier named Colby. Benjie’s one true friend turns out to be Neal McMasters, the rancher who raised Benjie and is now offering him a half-share in the McMasters land. As Benjie tries to make his new home, he helps some starving Indians and finds himself the owner of an Indian woman who eventually becomes his wife. He also uses Indians to help with the round-up. But things come to a violent turn when Kolby’s hatred launches a reign of anger that brings about an unusual white-black-red triangle in the phenomenon of prejudice.

Also Featuring the Cast of The McMasters 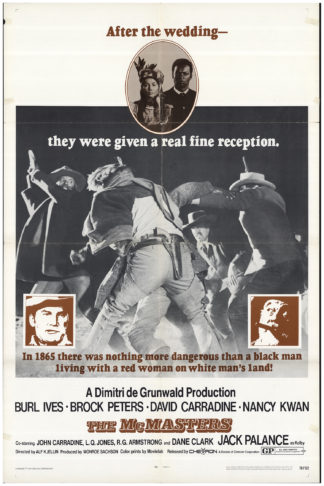