Friends Herman, Karl, Keith, Derek and Barry are working class Manchester lads who aren’t getting very far in their respective working lives. That fact is epitomized by Herman’s failure to get the promotion to junior account executive at the advertising company at which he works. Regardless, his Grandmother Gloria, with who he lives, has faith in him. What Herman really wants to do is race Mrs. Brown, a greyhound inherited from his now deceased grandfather. Mrs. Brown is a natural racer and has the potential to win. His four mates have bought equal ownership of Mrs. Brown. Their problem is is that what little money they collectively have goes into the care and feeding of Mrs. Brown, which doesn’t leave them enough money for such things as race entry fees, the ultimate race being one held in London. So, they try to raise money by their band Herman’s Hermits playing at whatever gig they can get. In their quest to get themselves to London and Mrs. Brown into that race, they get into one misadventure after another. Along the way, Herman, despite his neighborhood friend Tulip being in love with him, falls in love with model Judy Brown, the daughter of wealthy greengrocers and greyhound race aficionados Mr. and Mrs. G.G. Brown (short for George George). Judy’s mother ends up being not the only Mrs. Brown who Herman believes has a lovely daughter.

Also Featuring the Cast of Mrs. Brown, You’ve Got A Lovely Daughter 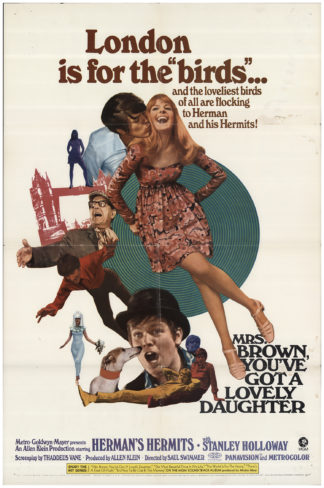 You're viewing: Mrs. Brown, You’ve Got A Lovely Daughter $30.00
Add to cart
Create a new list