A 25 year old female White House staffer, Carla Town, is murdered in the White House. D.C. homicide detective Regis is assigned to investigate, only to find evidence suppressed by the Secret Service. After suspecting a cover-up, Regis convinces Secret Service Agent Nina Chance to assist in uncovering the truth. The President’s son Kyle Neil is a prime suspect, as he was having sex with Carla within an hour of her murder. While the investigation ensues, the President, Jack Neil, is holding meetings with top military personnel regarding North Korea’s holding 23 U.S. military personnel hostage. Regis confronts top Secret Service Agent Spikings at his home shortly after Spikings returns with evidence leading to the murder. The home is attacked and Spikings is killed, but Regis makes it out alive with Agent Chance’s assistance, and with the evidence tape. White House adviser Jordan presents false evidence to the President that his son killed Carla and forces the President to say he will announce his resignation at 10 p.m. the following day. Regis and Chance break into the White House via underground tunnels, stop the President from resigning, and arrest Jordan for conspiracy to murder. Jordan pulls a gun, injures Agent Chance, and is killed by multiple Secret Service agents. A news briefing states there were false rumors of the President resigning, and also falsely state that Agent Spikings was killed in the gunfire exchange between Jordan and the Secret Service.

Also Featuring the Cast of Murder at 1600 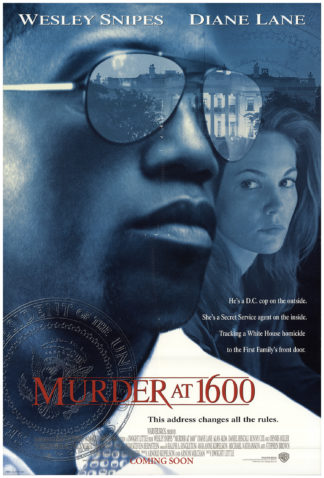