Condition Note: Condition: Poor to Fair. Edge wear, scuffing and some staining throughout, tears along right border, large tear on left middle border with tape and paper reinforcement on back, pinholes in all corners sections, some creasing in all corners, single-sided. Stored flat

Oklahoma Raiders is yet one more Betty Burbridge re-working of an original Bennett Cohen story (“Come on Danger,1932”, “The Renegade Ranger, 1938”, “Come On Danger, 1942” and “Alias Billy the Kid, 1946” among a couple of other uses), usually commissioned by Cohen or Oliver Drake as Associate Producers of whichever version they were involved with. In this one, the hero is an investigator sent by the U.S. Army rather than the Texas Rangers, but the roots show quickly. During the Civil War, Union Army Lieutenant Steve Nolan and Corporal Banjo Bonner are assigned to trail and capture “El Vengador/The Avenger”, outlaw leader whose band is stealing herds of wild horses before they can be delivered on contract to the Army. Disguised as an unshaven, seedy cowpuncher, Steve arrives in Benton, Oklahoma territory and witnesses the robbery of the post office by Duggan and Higgins, henchmen of Arnold Drew, who holds the contract to deliver the horses. Steve stops the two robbers but is wounded by the unseen Drew. The townspeople assume the unconscious Steve is part of the gang, and judge Clem Masters instructs a deputy to take Steve to the next town to have his head-wound treated. Drew orders Duggan and Higgins to ambush the wagon and kill Steve, but they shoot the deputy instead, and the team runs away with the helpless Steve. He is dumped over an embankment just as Donna Ross, Todd Wingate and Boone Talbot arrive on the scene. Donna takes Steve to a hideout in the mountains, where she is revealed as El Vengador, leading a group of dispossessed ranchers against Drew and land agent James Prescott, who have illegally taken over the rancher’s lands, so they can take over the contract of furnishing the horses. Steve is nursed back to health by Donna and returns clean-shaven to Benton to gather evidence against the Drew/Prescott gang, but Donna and Todd think he is a spy who has betrayed them. 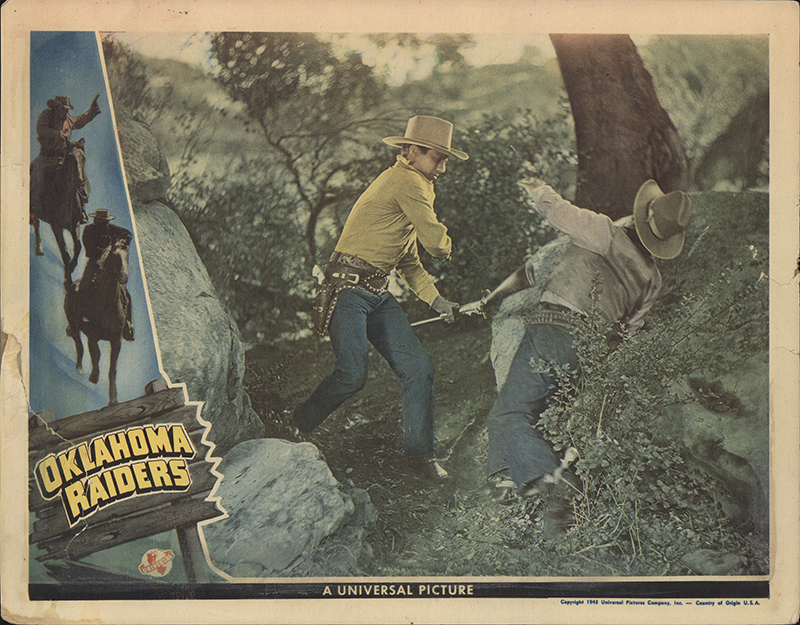