View cart “Arizona Terrors” has been added to your cart.

Condition Note: Condition: Fair. Some edge wear, some creasing in corners and along borders, slight wrinkling and some scuffing throughout, some staining along left and right borders, single-sided, stored flat

Marshal Clark sends Lash La Rue and Fuzzy Q. Jones to break up a gang of counterfeiters, led by Jim McCord, operating in a deserted village across the border. On the way, they chase off three outlaws in pursuit of a wagon carrying Frank Evans and his daughter Jane, who are trying to escape from the outlaw’s hideout. Lash leaves Fuzzy to guard the buckboard while he escorts the Evans’ to a friend’s cabin, and returns to find Fuzzy missing and a note, signed by the Frontier Phantom, advising him to get out of the country. He returns to the cabin and also finds Evans and his daughter gone, but runs into the Frontier Phantom, who is his exact double and his long-lost twin brother. They fight, Lash wins and takes the Phantom’s clothes and heads for the outlaw stronghold. There he finds Fuzzy has been made chief cook-and-bottle washer and janitor. McCord thinks there is something different about the Phantom and sends henchmen Turk and Buck to trail him. Lash gets rid of Buck, but Turk returns to McCord’s with the news of his real identity. Lash returns and is soon involved in a one-sided gun battle. Fuzzy goes for help and encounters the real Frontier Phantom who rides to the gun fight to join his brother. 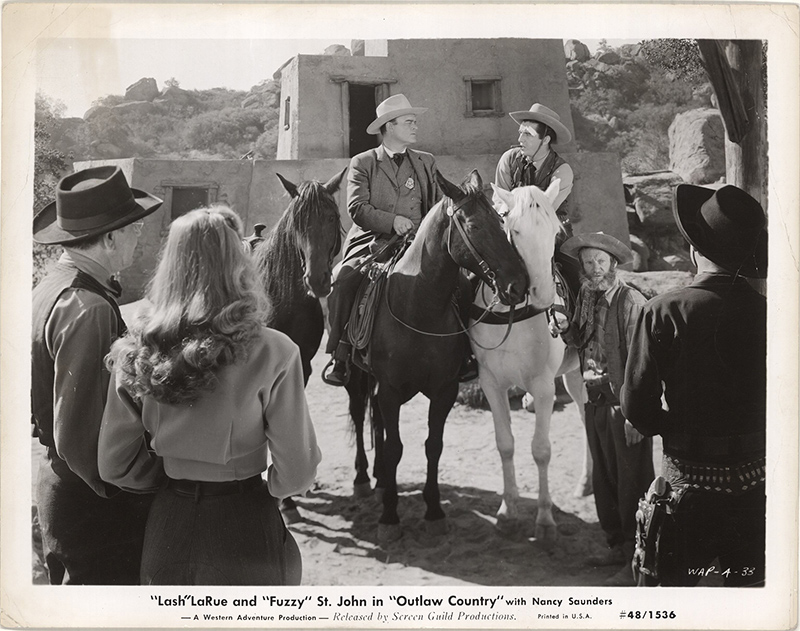