View cart “Overland to Deadwood” has been added to your cart.

Cash Quinlan, owner of the Quinlan Hauling Company, is the leader behind a band of raiders, who have been robbing stagecoaches between Mesquite and Deadwood, in an effort to drive his competitors out of business so that he will be able to get the railroad franchise for himself. The only outfit still left is one owned by Linda Banning. Steve Prescott and Lucky Chandler stop a holdup of a Banning stage and offer the girl their services. They are lodged in her barn, along with Harmony Hobbs, when Quinlan’s men set it on fire, but Steve recognizes one of the outlaws. Convinced he must use strategy to trap Quinlan, Steve picks a fight with Lucky and the, after losing it, goes to Quinlan stating he wants revenge against Lucky and Miss Banning, and asks to drive Quinlan’s stage in the race to determine which line gets the franchise. Quinlan, though, suspects a trick and puts a broken axel-pin on Steve’s wagon. He also has a dynamite charge placed in the stage driven by Lucky and then, has another one of his men drive a third stage.

Also Featuring the Cast of Overland to Deadwood 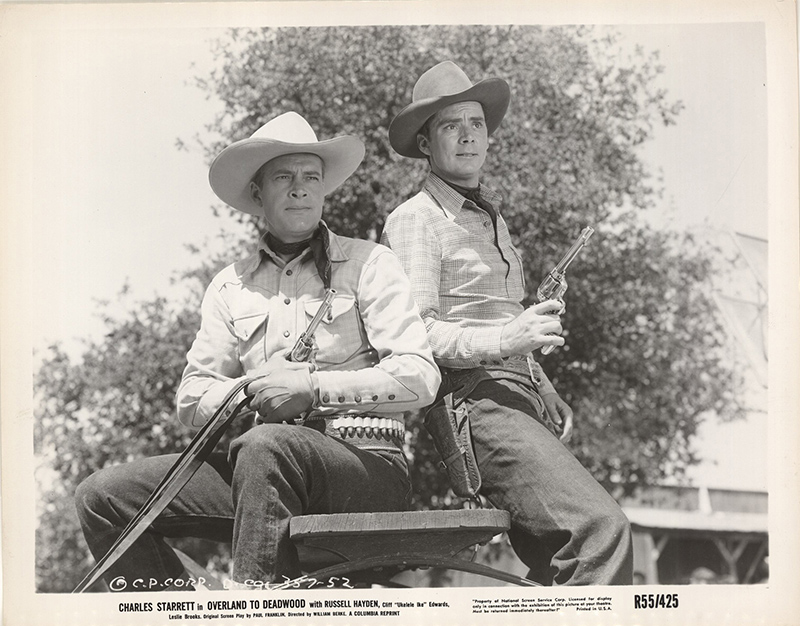 You're viewing: Overland to Deadwood $19.00
Add to cart