US Army Major Weldon Penderton is stationed on a base in the American south. He and his wife Leonora Penderton are in an unsatisfying marriage. Weldon is generally a solitary man who in his time alone tries to bolster his self image as he feels less than adequate as a man and a major. He does not want to viewed like Captain Murray Weincheck, who has been bypassed for promotion time and time again solely because he is seen as being too sensitive. Self absorbed Leonora, when not focused on her passion of horses and riding, tries to maintain the facade of being what she sees an officer’s wife should be while she carries on an affair with their next door neighbor, married Colonel Morris Langdon. Morris’ wife, Alison Langdon, suffered a nervous breakdown three years ago after miscarrying, she still with that nervous constitution. Alison is generally drawn toward sensitive types, such as Captain Weincheck and their faithful flamboyant Filipino houseboy, Anacleto. Peripheral to the Pendertons’ lives is brooding Private Williams, who Leonora knows as the enlisted man who works at the stables, and who Weldon asks to do some work around their house. While Weldon secretly becomes fixated on Williams, Williams in turn becomes secretly fixated on Leonora. The question becomes what emotions, many of those emotions being latent, will dictate what actions each of these people will make. 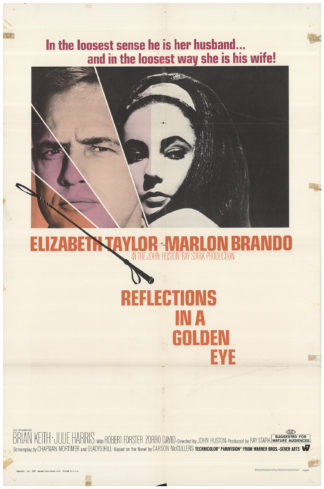 You're viewing: Reflections in a Golden Eye $40.00
Add to cart