Condition Note: Condition: Fair to Good. Edge wear, some creasing in corners, scuffing throughout, tears on top and bottom borders and right corners with some missing paper, some creasing in right middle section, single-sided and stored flat

Texas Rangers Steve Bowie and “Lucky” Laidlaw are assigned, with “Harmony” Bumpus, to investigate possible enemy action in the territory of Alaska. With a short-wave radio, they head for the ranch of a murdered Alaskan, Kendall. Neighboring ranchers Matt Taylor and his daughter, Sheila, investigate men they believe to be tramps. The men ride off shooting, and the pursuing Taylor runs across the undercover Rangers, now working for the United States government. Steve convinces Taylor he is the nephew of Kendall. The men on the Kendall ranch were Chris Larsen and his Nazi henchmen. Larsen killed Kendall and, taking orders from an offshore German U-Boat, is attempting to put in a runway for enemy planes. Young Buddy Taylor, Sheila’s kid brother, later sees men pouring cement on the Larsen ranch and is shot while trying to escape. Larsen plants the body on the Kendall ranch and Taylor accuses Steve and his friends of shooting the boy. Steve and his pals rally to expose the Nazi construction and capture Larsen, his henchmen, and the Nazi agent directing their activities..

Also Featuring the Cast of Riders of the Northland 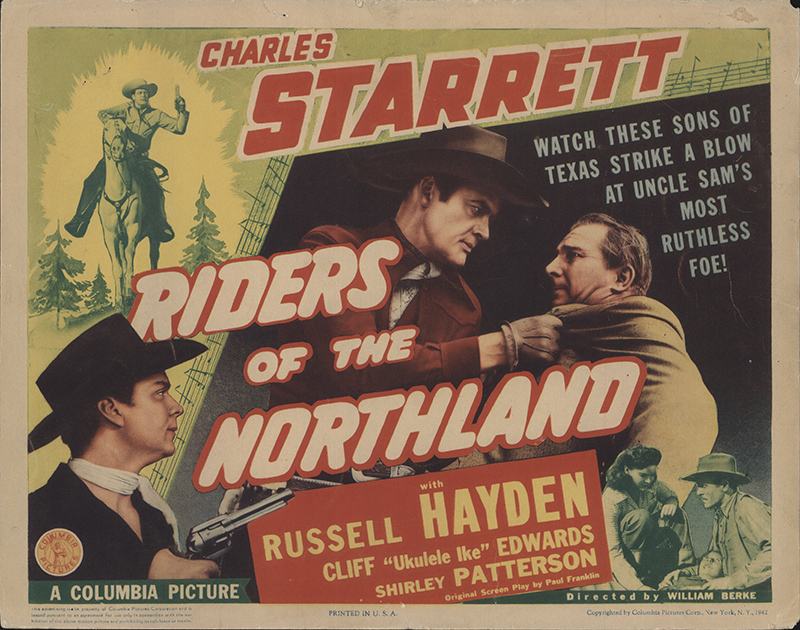 You're viewing: Riders of the Northland $50.00
Add to cart