Condition Note: Condition: Fair to Good. Previously folded, fold wear, wrinkling and scuffing throughout, some staining along borders, edge wear, tape on top middle border, small tears along all borders, some creasing in all corners, single-sided

A posse, hunting the assailant of Denton’s Partner, captures Steve Carlisle (Charles Starrett), who identifies himself as a mineralogist sent to check the area for quartz for radio parts. Calling at the Denton ranch, Steve hires Cannonball Mullins (Dub Taylor), who has just been fired by Jane Fielding (Vi Athens), Denton’s ward. Steve learns that she wants to sell the ranch to the Empire Syndicate. Paul Edwards (Lloyd Bridges), syndicate representative, plans to convert the ranch into a swank hotel-gambling operation. At a party which Jane gives for Edwards, Hiram Denton (William Gould), is murdered and Steve is accused. He and Cannonball escape before the sheriff can take them into custody, and in searching for evidence find that Jane and Edwards are married and have done the killings in order to gain the ranch. 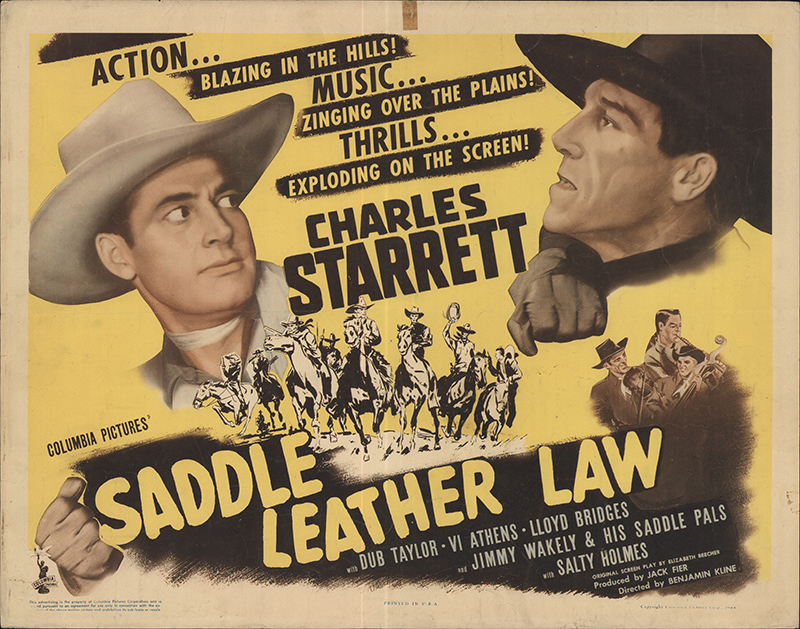