Buddy, Barilli, Mingo and Ansel, detectives with the NYPD, comprise a secret investigative unit called the Seven-Ups, who, largely undercover, focus on cases leading to felony convictions with prison sentences of seven years or more for the criminals in question. Many within the NYPD who know about the unit don’t support the idea of it because of the often unethical way they work on the cases, but their superior, Inspector Gilson, defends the unit solely because of the results. On the sly, Buddy, who is the head of the team, gets much of the information for the cases from Vito Lucia, a childhood friend who still lives and works in the old neighborhood where much of the crime is based. Vito knows that his life could be in danger if the mob finds out that he acts as a snitch for the police. After Buddy starts looking into the loan sharking business of some local mob members, unknown to him some of those mob members are shaken down for a minimum $100,000 apiece, one by one kidnapped for ransom before they are released when the extortionists are able to abscond with the ransom money. The M.O. of the extortionists is for two to act as police detectives bringing the mob member in for questioning, before showing their true colors of kidnapping the person for ransom. The mob has no reason to doubt that the men truly are NYPD gone bad. Buddy even sees one of them taken in, a bail bondsman named Festa with mob ties, he knowing that what he witnessed was not what it appeared on the surface, however unaware that this situation was not a one off in the scuttlebutt he had previous heard about general unrest on the streets. By the time that Buddy learns of the serial kidnappings and the unofficial war the mob has with the NYPD because of it, Buddy and the team are determined to nab the mastermind behind the extortions as it has become more than a professional issue for them.

Also Featuring the Cast of The Seven-Ups 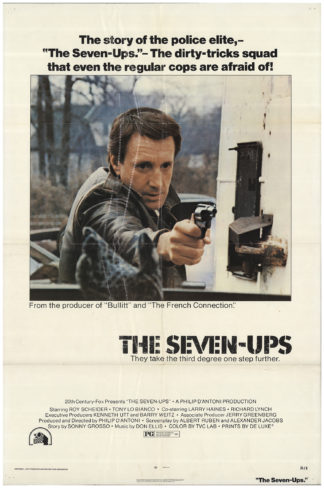