Condition Note: (G) Pinholes on all four corners, in white and color. Tape on top edge at center vertical fold. Extensive tearing along the left edge of the poster in two places. Tape in two locations across the center of the poster. Folded.

In London, stuffy statesman Carter Harrison meets Toni, a Bohemian artist with a hot Italian temper. The two impulsively marry and then find that they disagree on everything. Shortly afterward they separate. We then meet them five years later on the eve before their divorce becomes final. After seeing each other again, sparks are reignited and they spend the night together. Reality sets in when morning comes and they begin arguing again. Once again, divorce proceedings are on, until Carter that an important promotion hinges on whether he’s married. He schemes to win back Toni and eventually succeeds. But can he keep her from destroying his career by posing as Lady Godiva in a protest movement? Strange Bedfellows, the 1965 Melvin Frank sex comedy (“They love to fight, but not at night!”; “Rock tangles with an Italian bombshell in a riotous love-bout!”; “It’s love Italian style…with an American twist!”; “It’s Rock’s most riotous love-bout!”; “Story by Norman Panama and Melvin Frank”) starring Rock Hudson, Gina Lollobrigida, Gig Young, Edward Judd, Arthur Haynes, Terry-Thomas (billed as “Guest Star Terry-Thomas”; born Terry Thomas Hoar Stevens, he was a very minor actor from 1935 to 1941, and then quit the business for seven years, and in his forties he became quite popular in English comedies, and he adopted the stage name of “Terry-Thomas”, and he had a gap between his front teeth which was his trademark), and Nancy Kulp (best remembered as “Miz Jane” in TV’s “The Beverly Hillbillies”) 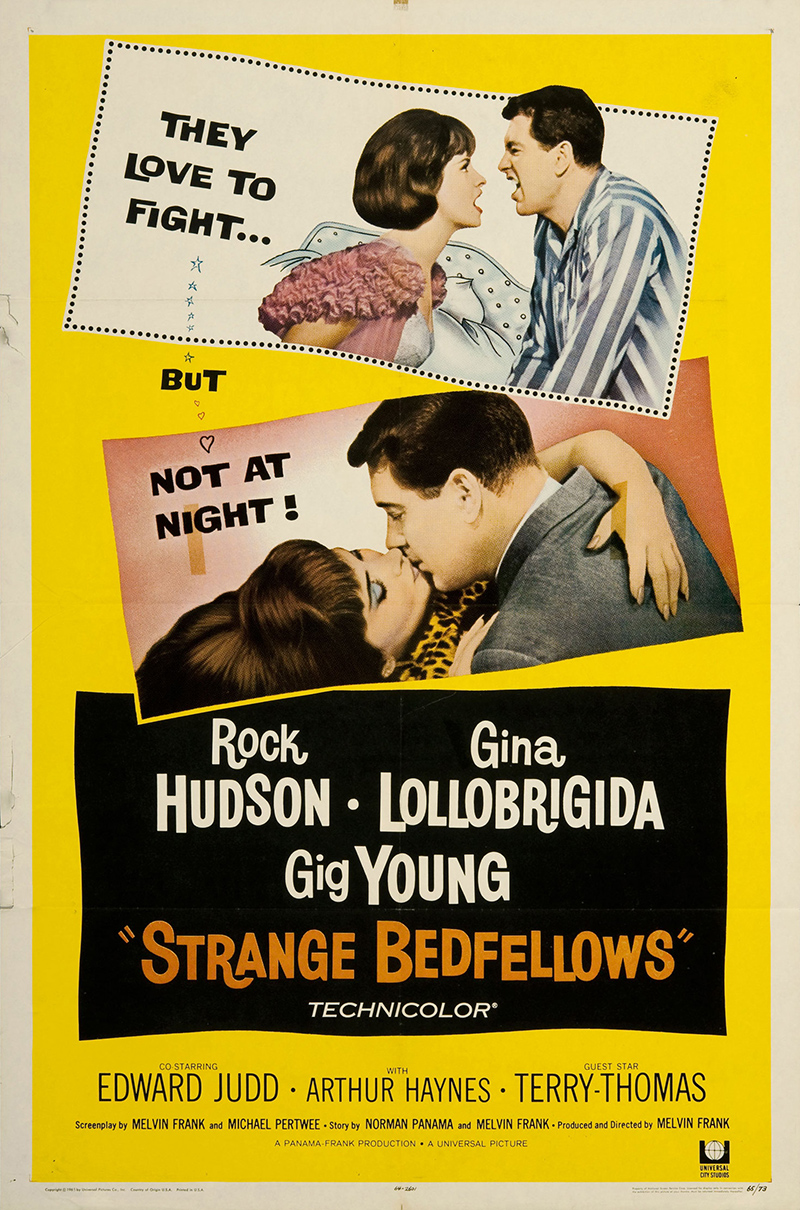