Condition Note: Condition: Good. Edge wear, wrinkling and some scuffing throughout, slight discoloration throughout, some creasing in corners and along some borders, tears on left and right borders with some missing paper and some tape reinforcement on back, large tears in bottom middle section, double sided, stored rolled

The story centers around a man and a woman, whose fates are intertwined and will change forever. Nelson is an avid advertiser living in San Francisco. One day, during a driving test, he meets Sara, a beautiful but seemingly eccentric woman. But, she is falsely accused of cheating and ends up failing the test because of Nelson. After getting kicked out of the exam, Sara waits for him outside and starts to insult him. However, Nelson ignores her and takes off. Then, she traces him down and shows up at his place. She promises to leave him alone only if he gives her a ride. Later that night, she asks him to live with her throughout November on the promise that his life will change for the better. He turns her down saying that he has a girlfriend. On the first day of November, after being fired and dumped on the very same day, Nelson decides to give it a try and then somehow, agrees to spend the whole month with Sara and finds himself in a desperate love affair that he will remember for the rest of his life. 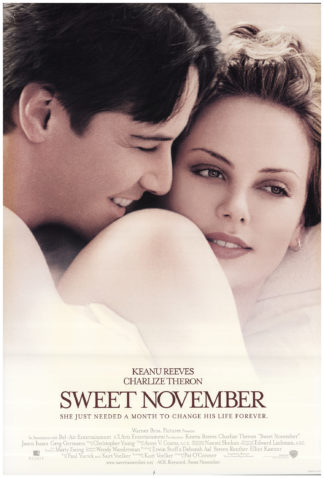