View cart “White Fang” has been added to your cart.

Ranch foreman Steve Barrett and “Tiny” Baldwin are rival ranchers competing to furnish cavalry horses for the U.S.Army during World War Two but put aside their differences, in order to aid the war effort, with one exception; that, being which ranch wins The Singing Championship at the 1944 Frontier Days Celebration. “Tiny” and his Hoosier Hotshots won the 1943 title, but Steve has some hired-guitars of his own in Jimmy Wakely and His Oklahoma Cowboys. Meanwhile, Penny Morrow and Addie LaTour , two out-of-work actresses, have arrived at Steve’s spread in search of Northrup Bayless whom Addie has promised to marry through a Lonely Hearts Club. Steve thinks they are there in response to his ad for a cook. Neither Addie nor Penny can cook, but Penny can sing and Steve hires her. He intends to use the $3,000 prize money to buy the ranch from the owner, Doreen Nesbitt. Back in the kitchen, Judy, incensed at being replaced in the kitchen by the new arrivals reads about them in a theatrical journal, discloses their true profession to Steve, and since the rules of the Singing Contest forbid professionals, Penny can’t sing for her keep. And, without her as an extra-added attraction, there isn’t any way Steve’s outfit is going to beat “Tiny’s” Hoosier Hotshots. But…there is a loophole in the rules that Steve intends to take advantage of.

Also Featuring the Cast of Swing in the Saddle 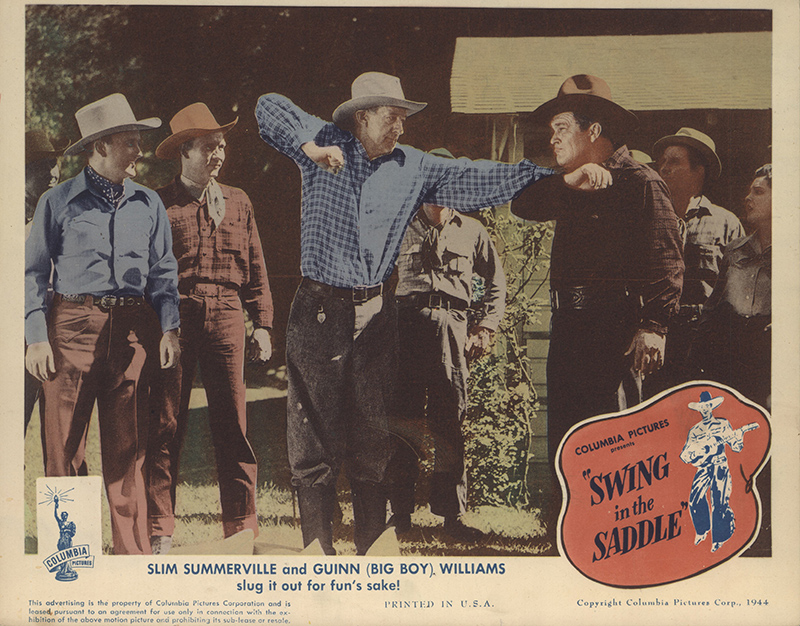