Summoned by an Indian princess, Tarzan travels to India where hundreds of wild elephants are in danger. A company is building a hydroelectric dam and the contractors have only a few weeks to finish the job. The building of the dam will flood the valley surrounded by mountains. There is one pass through which the elephant herd can escape but that is being closed. Tarzan comes up against an old nemesis, Bryce, the chief engineer. Bryce undertook a similar dam project in Africa and had a penchant for shooting elephants. It’s up to Tarzan to organize the move before Bryce manages to close the pass. Edgar Rice Burroughs’ Tarzan Goes to India, the 1962 John Guillermin English/U.S./Swiss jungle action adventure thriller (“NEWEST TARZAN! Most spectacular of them all!”; “ALL NEW! Greatest Tarzan thrills!”; “The King of the jungle finds new adventure in a new land in a fabulous filmed-on-location spectacle in mystic India!”; “ALL NEW! GREATEST TARZAN THRILLS! The King of the Jungle in a new adventure… filmed on location in mystic India!”; “NEW ROMANCE! With sultry Princess Kamara”; “NEW ADVENTURE! Jai… Boy tamer of bull elephants!”; “New Excitement! Earth-shaking fury of elephant stampede!”; “Screen Play by Robert Hardy Andrews and John Guillermin”) starring Jock Mahoney (best remembered from playing Tarzan in several movies, and for his starring roles in two TV series, The Range Rider and Yancy Derringer; he was born Jacques O’Mahoney, and was of French and Irish heritage!; in the title role as Tarzan), Jai (“The Elephant Boy”), Gajendra (“King of the Elephants”), Leo Gordon, Mark Dana, Feroz Khan, and Simi Garawel

Also Featuring the Cast of Tarzan Goes to India 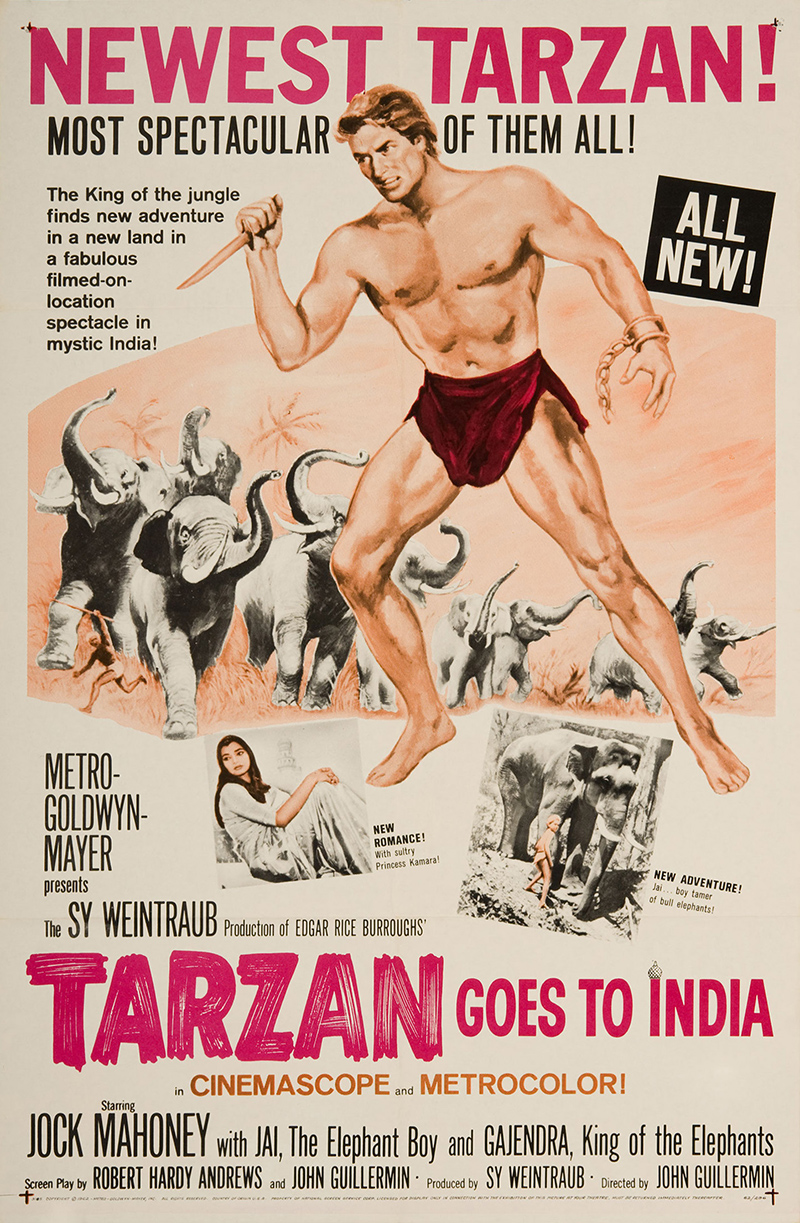