Condition Note: Condition: Very Good. Some fold wear, fold separation, some edge wear, some scuffing throughout, slight bleed through from writing on back of top right section, pinholes in top and bottom sections, small tears on all borders with some missing paper on top border and top fold line, single-sided, stored folded

Ana, the Princess of Eboli, wears a black patch over her right eye, where she was blinded as a youth when fighting a duel in defense of her king, the despotic Philip. Thereafter she and the monarch were close friends, although his passion for her was never consummated. She marries one of Philip’s ministers, bore him a son, and soon became a widow. Now Philip calls upon her to assist in coaching a commoner, Antonio Perez, for the office of first secretary to the crown.The result is more than Philip bargained for as Ana and Antonio become lovers and create a scandal in court, always the scene of perpetual intrigue. Philip has Antonio arrested on a drummed-up charge of murder, and when Ana refuses to leave Madrid, she too is arrested. After spending time in jail, she is transferred to her home and held in check. Antonio escapes and makes his way to Ana, who persuades him to leave the country and take her son.

Also Featuring the Cast of That Lady 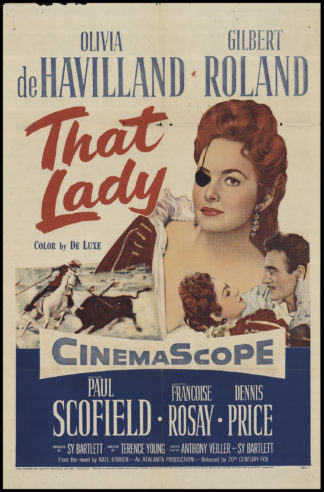