Bored and somewhat fed up with the open corruption around him, Webster McGee decides to quit his job as a computer engineer at Houston-based Control Data Corporation. What he doesn’t tell his friends and now former associates is that he does have a plan for his future: to become a jewel thief. His initial primary motivation is not the money, but rather be what he considers an honest thief. His first successful theft against corrupt businessman Gene Henderling leads to several things. Out of circumstance, Webster is able to have a long list of potential future targets. Webster begins a relationship with poor but beautiful socialite Laura Keaton, to who he is open about what he now does as a living. Because he leaves at his thefts a calling card in the form a chess piece and a slip of paper with a chess move, Webster, being coined the Chess Burglar by the media, begins a very public chess match with the Houston Post’s elitist chess columnist Zukovsky, who dismisses the Chess Burglar as an amateur in every respect of the word. But most importantly, Webster becomes the only suspect as the Chess Burglar by insurance investigator David Reilly, to who Webster taunts as indeed being the Chess Burglar short of coming right out and saying the words. Another outcome of Webster’s relationship with Dave is that Webster’s ex-wife, actress Jackie Johnson, reenters his life, she who left a boring computer engineer, but who is interested in a relationship with an exciting jewel thief.

Also Featuring the Cast of The Thief Who Came to Dinner 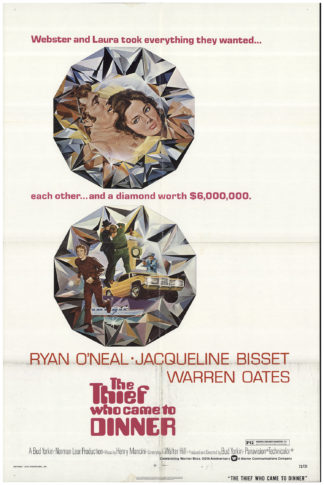