Condition Note: (P-F) Pinholes on upper left and right corners, in white. Faint stains on the upper left corner. Tape residue on the top edge at the center vertical fold. Someone has cut off the entire bottom edge, and retaped it back on, leaving off about 2 inches of the bottom white border missing. Folded

Dark tale of one man’s determination to survive his tour of duty. Separated from his new wife after only eight days of marriage, private Doll suddenly decides that he will no longer blindly follow the orders of his superiors, following his own mind instead. What follows are a series of poorly planned attacks, in which Doll saves the day, time after time; eventually leading to the taking of the Elephant in the battle of Guadalcanal during World War II. Sgt. Welsh, Doll’s immediate line officer grows an affinity for Doll, helping him through his first Kill, but never quite allowing himself to admit his admiration for the young soldier. The final scene of the movie brings home the true horror of war and the meaninglessness of it all. The Thin Red Line, the 1964 Andrew Marton World War II (WWII) military action thriller (“GREAT BOOKS MAKE GREAT MOTION PICTURES”; ‘From Here To Eternity’s Author… James Jones… Now Brings You All The Lust And Guts, All The Brute Power, Of His Greatest Story!”; “‘From Here to Eternity’ was James Jones’ greatest…UNTIL THIS ONE”; … It Separates The Hero And Coward…”; “Love And Sex A Man And His Hell!”; “Over one million copies sold!”; “From the novel by James Jones”) starring Keir Dullea (billed as “The Star of ‘David & Lisa'”), Jack Warden, James Philbrook, Ray Daley, Robert Kanter, Merlyn Yordan, and Kieron Moore

Also Featuring the Cast of The Thin Red Line 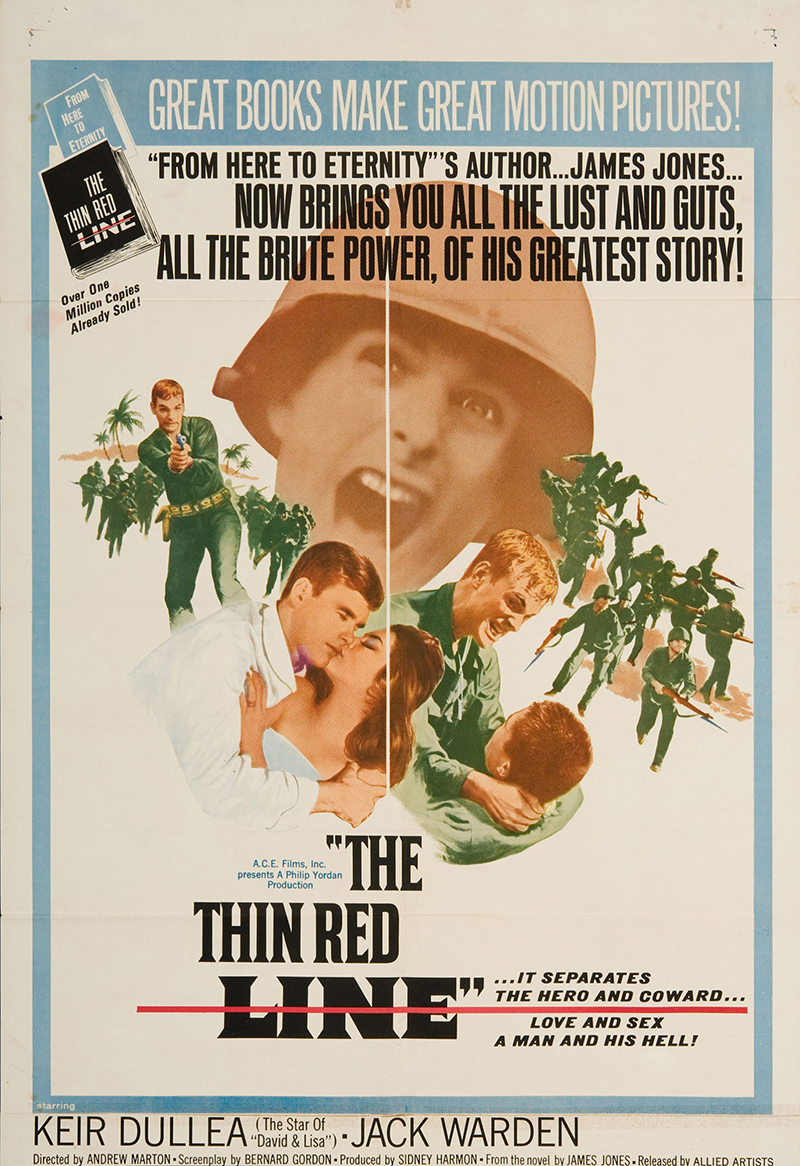