A large box arrives for Donald on his birthday, three gifts inside. He unwraps one at a time, and each takes him on an adventure. The first is a movie projector with a film about the birds of South America; Donald watches two cartoons, one tells of a penguin who longs to live on a tropical isle and the other about a gaucho boy who hunts the wild ostrich. The second gift is a pop-up book about Brazil. Inside is Jose Carioca, who takes Donald to Brazil’s Bahia for a mix of animation and live action: the two cartoon birds sing and dance with natives. The third gift is a piñata, accompanied by Panchito. A ride on a magic serape takes the three amigos singing and dancing across Mexico. ¡Olé!

Also Featuring the Cast of The Three Caballeros 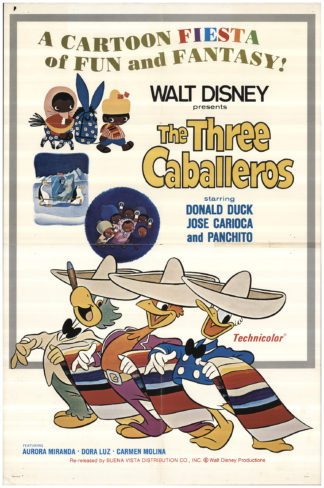 You're viewing: The Three Caballeros $25.00
Add to cart