In Arkansas, a stagecoach is robbed by Colonel Brinkley’s gang. What the gang is really after is a treasure map one of the stagecoach passengers carries. However, Mr. Engel only has half the map. The other half of the treasure map is held by Engel’s partner, a Mr. Patterson. Even so, the gang kills Engel and steal his half a map. Later, Fred Engel, the son of the murdered stagecoach passenger, seeks help to find his father’s killers and retrieve the map. He contacts famous frontier scout Old Shatterhand and his Apache blood brother Winnetou. The three men set out to catch the killers. Fred Engel reveals to his two friends that his father’s missing map pinpoints the location of a gold treasure at Silver Lake. They head toward the farm owned by Mr. Patterson, Engel’s business partner. Patterson has the other half of the map and a daughter, Ellen, whom Fred is in-love with. Unfortunately, Colonel Brinkley’s gang has the same idea of retrieving the other half of the treasure map, since the gang already has the first half of the map.

Also Featuring the Cast of The Treasure of Silver Lake 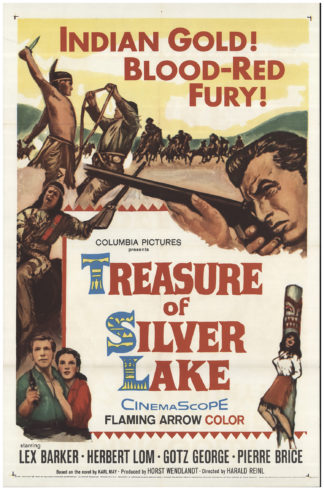 You're viewing: The Treasure of Silver Lake $30.00
Add to cart