Condition Note: Condition: Good. Previously folded, heavy fold wear, some fold separation, scuffing throughout, some staining along borders, pinholes in top and bottom sections, tears on all borders with some missing paper and some tape reinforcement on back, single-sided, stored flat

Young and inexperienced Nancy Peterson leaves her hometown of Pelican Falls, Vermont, to try to make it big on Broadway. Along the way, she meets Hannah Holbrook, Joyce Campbell and S.F. “Foxy” Rogers, three struggling and starving chorines who are heading back to New York after a disastrous run on a showboat in Vermont. In New York, Nancy also meets baritone Dan Carter, who is thinking about heading back to his hometown of Denver after two years of getting nowhere on Broadway. Beyond meeting Nancy, what Hannah, Joyce, Foxy and Dan also have in common is that they are each represented by Lou Conway, a somewhat shyster of an agent who relies on the good-natured if somewhat reluctant funding of local deli owners Leo and Harry to advance Hannah, Joyce, Foxy and Dan’s careers. Regardless, Hannah loves Lou, the two who are engaged. To appease most specifically Dan, Lou comes up with his latest scheme to make his name known to the public: move to a new medium – television – by getting him a spot on Bob Crosby’s variety show, which requires not just Dan singing, but a complete act with four pretty and talented chorines backing him up. Dan and the four girls agree, especially after Dan runs into Dennis McGiven, Bob Crosby’s producer, who as much as guarantees Dan such a spot if the act is good. As Dan and the girls prepare a routine, what they are unaware of is that Dennis McGiven was not who he appeared, but was a plant by Lou to further the scheme. All Lou has to do is get Dan and the girls really onto the show. In the process of rehearsals, Dan and Nancy fall in love. But it may all fall apart if their professional aspirations cannot be met by Lou, or if some misunderstandings come to pass because of Lou’s swindle.

Also Featuring the Cast of Two Tickets to Broadway 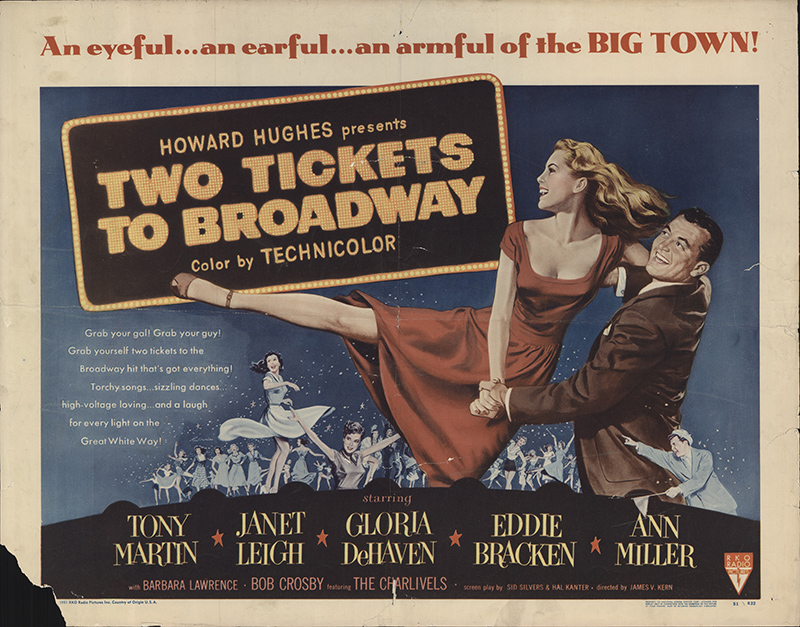 You're viewing: Two Tickets to Broadway $50.00
Add to cart