The battleship Missouri is about to be decomissioned. Casey Ryback is Captain Adam’s personal cook. And Ryback is always butting heads with the ship’s XO Commander Krill but the Captain always intercedes. One day, after the President visits the Missouri, which is also the Captain’s birthday, the Captain learns that a helicopter has been cleared to land on the ship by Commander Krill, which he was not informed of. When questioned Krill tells the Captain that it’s a surprise for his birthday, the Captain then allows it. Later after another one of their scuffles, Krill has Ryback locked in the freezer. During the party, the rock band reveals themselves to be mercenaries, led by William Stranix, a CIA operative, who is in league with Krill to unload all of the ship’s nuclear warheads. They lock up all of the crew and make preparations to remove the warheads. And Krill remembers Ryback, Stranix sends two of his men to take care of Ryback, only thing is that Ryback took care of them. Upon discovering their bodies, Stranix deduces that Ryback is more than a cook. He then sends Krill to check on him, and Krill discovers that Ryback’s a NAVY SEAL, who got busted down to a cook after an incident in Panama. And Ryback continues to create trouble for them, so Stranix tries to hunt him down. Along the way, Ryback meets Jordan, a former playmate, who was supposed to entertain at the party but was also forgotten.

Also Featuring the Cast of Under Siege 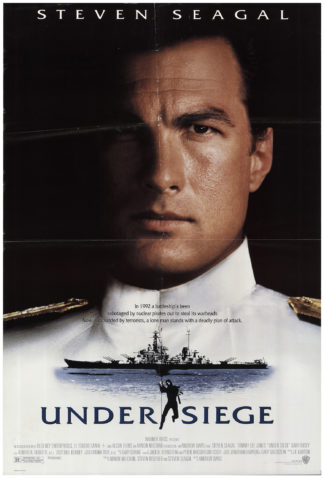